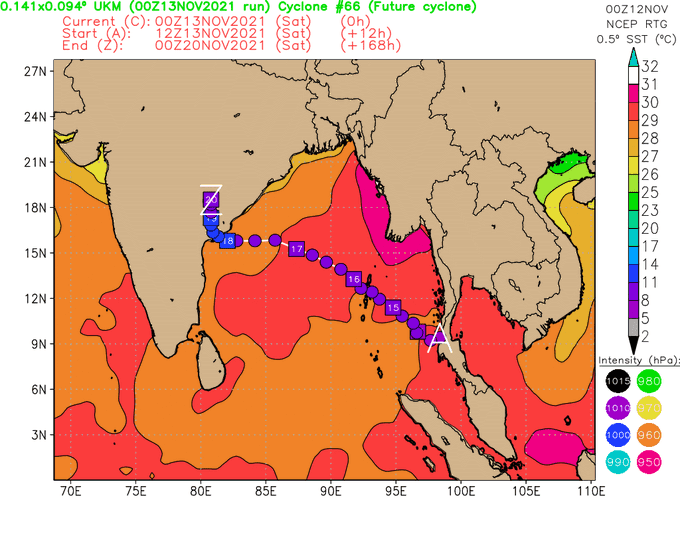 Sri Lanka and Kerala, southwestern India reported floods, too and the region is prepared for the next late-November and early-December storms.

Cyclone activity in the last period hit almost all southern half of Asia, from Arabian Peninsula to Indonesia /https://mkweather.com/deadly-floods-and-cyclonic-activity-in-southern-asia-from-saudi-arabia-to-indonesia-sri-lanka-and-india-25-dead-indonesia-8-dead-210-mm-24-h-in-chennai-india//.

In Thailand, tropical rainfall brought regionally up to 10 inches / 250 mm of rain in a very short time in the last week.

In Bali, Indonesia, even, giant waterspout (tornado above water) appeared.

92B Invest has gradually shifted above eastern India, mainly the Chennai region, with additional heavy rainfall and floods (link above).

Floods in Sri Lanka and southern India in November 2021 caused already minimally 40 dead, although, any tropical storm or cyclone, only weaker tropical depressions have appeared.

The next tropical systems in Southeastern Asia and southern India with Sri Lanka are forecasted until early December 2021, with the next possible floods or landslides.

These conditions, with heavy rainfall in the region, are caused mainly by a combination of La Nina – negative IOD and wet MJO patterns.

Negative IOD will shift into positive IOD phase-only during the second half of Winter 2021/2022 what means a shift of cyclone activity above Eastern Africa, southern Arabian Peninsula, or Western India.