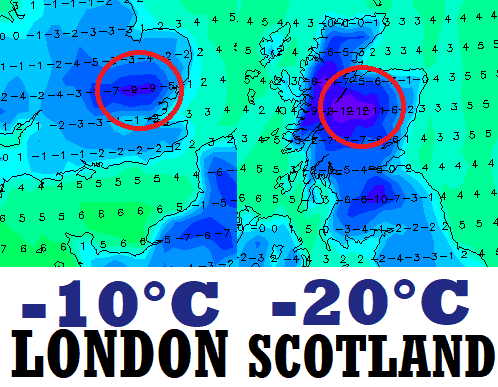 Extremely cold air from Greenland should flood British Islands such as one of the first regions in Europe, with a potential of extremely low temperatures.

The last run of GFS returned for London region values up to -9°C, which should mean frosts below -10°C in the UK´s capital.

In Scotland, reality should be much colder – in frost basins and valleys with snow cover, temperatures up to -20/-25°C (-15°C on outputs minus estimated local anomaly).

Northern England or Wales should surprise with rare temperatures below -15°C, Ireland should end very close to -10°C in continental valleys.

The all-time November monthly record for Heathrow, -7,1°C should be broken – the coldest times are forecasted already in 9 days, on 27.-28. November 2021.

If you live in British Islands, we strongly recommend you to watch current weather news, forecasts, warnings, and advisories.

(Visited 277 times, 1 visits today)
Liked it? Take a second to support on Patreon!