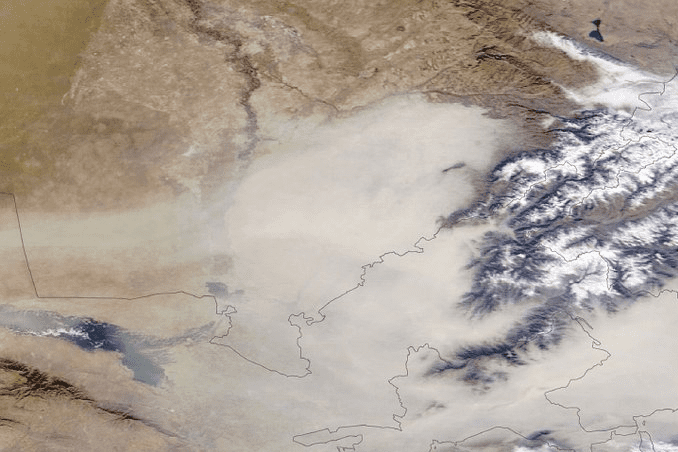 Desertification is nowadays a serious problem not only in Central Asia but in many parts of the world from China, Argentina, Australia, western USA, South Africa, the Mediterranean, or even Hungary.

E.g. dust storms in China from the Gobi desert are more and more frequent and they are threatening one of the most populated regions in the world (an article from our old webpage: https://mkweather.com/gobi-desert-is-growing-fastest-on-earth-beijing-hit-already-3rd-major-dust-storm-in-5-weeks/).

In Central Asia, decades were problems with Aral Lake (Aral Sea) and its affluxes Amudarja and Syrdarja – water from these rivers was used in extensive agriculture and one of the largest lakes in the world almost disappeared.

The worst dust storm in history and severe dust storm that started in southern Kazakhstan hit around 4.-5. November parts of Uzbekistan according to the country’s meteorological service report.

A dust storm was blowing over Uzbekistan caused by the drought in Turkestan Kazakhstan bringing with it a mix of dust and particles with pollution never seen in the history of this region.

The storm was the most severe in Tashkent and the southern Syrdarya Region in Uzbekistan, and Kazakhstan’s Turkestan Region.

Dust levels in air up by 30 times as dust storm hits Tashkent and the dust storm is noted such as the worst dust storm in the last minimally 150 years.

Uzbekistan’s capital Tashkent found itself under thick ‘dusty fog’, which was causing widespread respiratory problems, mainly to people with asthma; COVID-19 conditions thanks to significant air pollution was probably worsened, too.

“Under the influence of gusts of wind, the parched upper layer of soil rose up, creating the effect of a dust and sand haze, with a deterioration in visibility to 100-200 meters in a number of districts in the country,” is telling a report from Uzbekistan’s meteorological service, known as Uzgidromet, wrote server Eurasianet (eurasianet.org).

Ambulance services around the country received around 4 000 calls needing help with respiratory problems.

The Ministry of Health urged to wear facemasks outdoors; close windows; place damp towels at doorjambs, and rinse throats and noses with saline water according to Eurasianet.

The region faced to a similar event according to professionals in all scales the first time in history and in the future, thanks to desertification and extremely hot summers, the next similar dust storms will be, mainly during autumn months, possible.

(Visited 82 times, 3 visits today)
Liked it? Take a second to support on Patreon!