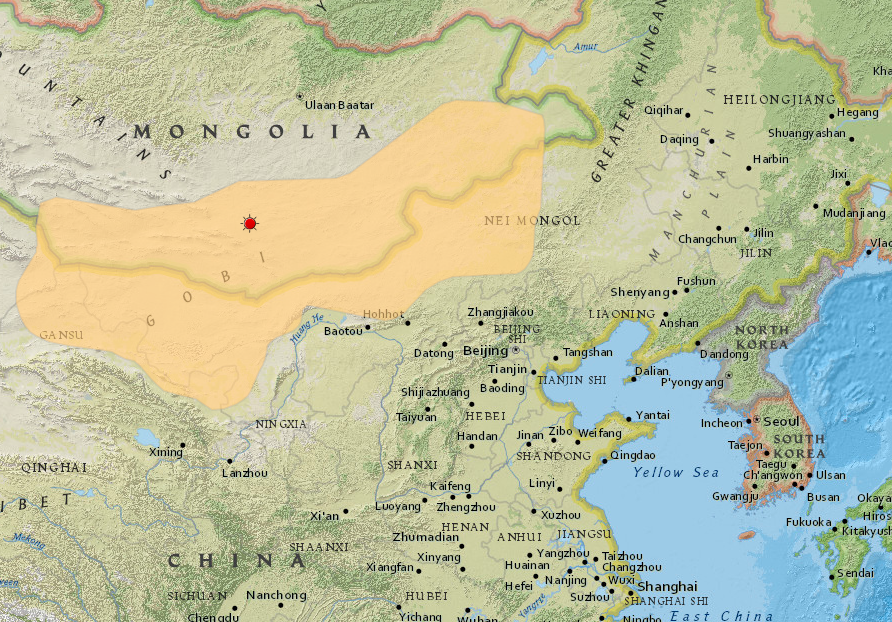 Only before a month we informed about the most hazardous sandstorm in 10 years, which hit Beijing and brought alarming values of air pollution not only to Chinese capital, but too in large parts of Mongolia and China /https://mkweather.com/beijing-hit-the-most-hazardous-sandstorm-in-10-years//.

Since this 10-year event, the second and in last days third major dust storm have appeared, with returning worsening of air pollution in the city and large neighborhood in northeastern China and Korea.

The worst situation was in Beijing around Thursday, 15. April 2021, when visibility dropped into 1,8 km and some parts of the city saw extremely high air quality index above 1 300.

According to inhabitants of the city, air quality is much worse than in previous years after region hit several dust storms in 2021.

A reason of worsening of air and life quality in the most populous parts of China is very strongly associated with extremely fast growing of Gobi desert, northewestward from the largest metropolitan areas.

Western and northwestern winds from the continent, mainly on cold fronts therefore are bringing more and more often serious health risk and it´s possible, that situation will be during the next decades only worsening.

“Currently, the Gobi Desert is considered the fifth largest desert in the world. However, the problem is that the desert is currently trying to climb those rankings to the number one spot. The Gobi Desert is ever expanding and threatening to choke out the nearby civilization. The Chinese capital of Beijing, for example, is constantly being battered by large scale dust storms blowing in from the desert.” according to The Expansion of the Gobi Desert (arcgis.com)

More than 2,250 miles of grassland are being swallowed by the Gobi Desert each year and desert is spreading towards Yellow Sea extremely quickly – Beijing is already situated on half-way between Gobi and Yellow Sea.

Against climate change in the region is trying to fight a project Three-North Shelter Forest Program. Project includes a series of human-planted windbreaking forest strips (shelterbelts) in China around 4 500 kilometers long, designed to hold back the expansion of the Gobi desert and provide timber to the regional population. Works on program started in 1978, and is planned to be completed around 2050.

Land erosion and overfarming however have halted planting in many regions and project met with many unexpected problems and criticism.

It´s already 1,73 million square kilometers that have become desert in China and only approximately a third of this area is treatable.

It appears, that climate change should have strong impact into Chinese main populated region in next decades. These facts are probably one of the factors, why is China calling for closer cooperation on climate change nowdays /https://www.marketwatch.com/story/china-calls-for-closer-cooperation-on-climate-change-ahead-of-bidens-earth-day-summit-01618604178/.

Fighting with growing Gobi is therefore for Chinese management and scientific community a big challenge for 21. century.