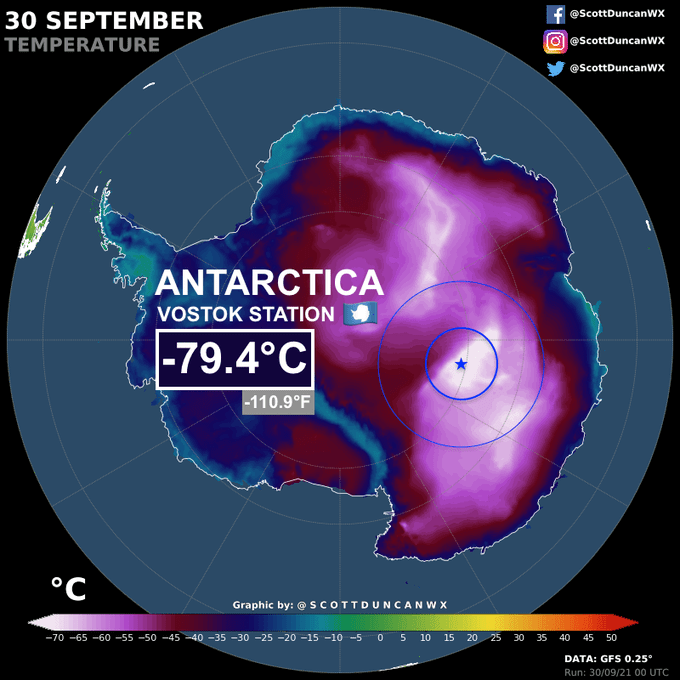 Only before a few days, we were writing about anomalous temperatures in Antarctica /https://mkweather.com/antarctica-very-close-to-temperature-records-vostok-757c-dome-fuji-740c//.

Meantime, the situation became even worse, and around 30. September – 1. October 2021 was peaking in the region of Vostok Station, Antarctica, abnormally cold weather, only a few decimals of degree Celsius above all-time World records for the month of October from the same station.

The minimum temperature at the station in the mentioned period dropped to -79,4°C, which is only 0,6°C from the all-time October record for the station, Antarctica, and World.

According to seattletimes.com /https://www.seattletimes.com/nation-world/south-pole-posts-most-severe-cold-season-on-record-an-anomaly-in-a-warming-world// scientists credited a very strong polar vortex, or a ring of strong winds in the stratosphere, surrounding Antarctica for the intensity of the cold.

Whether the vortex is strong or weak depends on a cycle known as Southern Annular Mode (SAM) / Antarctic Oscillation (AAO). Right now, the mode is in its positive phase and the vortex is intense, as is written in the mentioned article.

This phenomenon is associated with the ozone layer above Antarctica, but too with a changing climate in the region – some parts of the continent (mainly East Antarctica) are showing a cooling 40-years trend, thanks to the re-freezing Southern Ocean.

Sweet water from the Antarctic glacier freezes around the continent, with a result of increasing albedo of the region and subsequent cooling tendencies.

AAO index (Antarctic Oscillation index) was between 20.-30. September 2021 is extremely high, from +1.0 to +2.6 – its an equivalent for SAM (Southern Annular Mode), and its positive phase during the extreme coldwave was evident.

On the contrary, surprisingly extreme coldwaves above the continents of the Southern Hemisphere (South America, South Africa, Australia, and Oceania) are associated mainly with opposite, AAO- / SAM- (negative phase of AAO / SAM), when the polar vortex is more destabilized and Antarctic fronts and cyclones hit southern parts of the continent more frequently.

AAO+ phases are after the year 2000 much more frequent such as AAO-, with increasing trend, which means, that coldwaves in the next decades in Antarctica should be even stronger and for some species or expeditions possibly fights for survival.