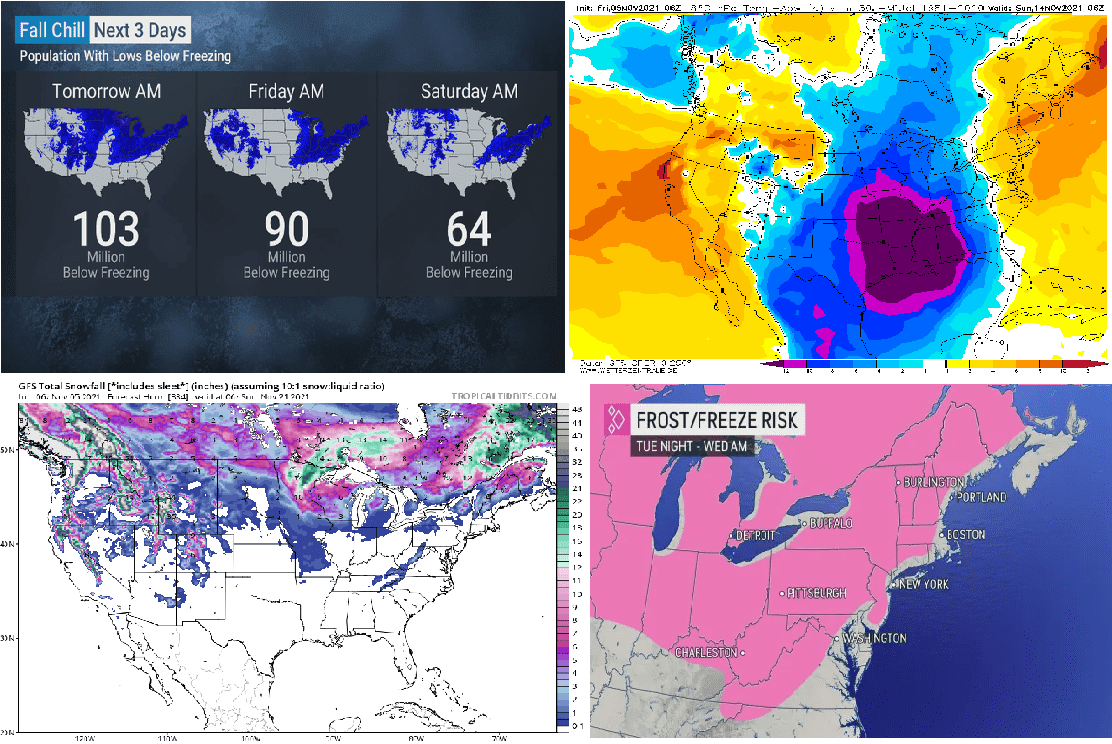 Extremely cold weather in the USA in late October and early November 2021 was peaking on 4. November 2021, when together around 103 million Americans were hit by freezing weather (maps below).

Anomalously cold air with snow sleets is shifting above eastern parts of the USA and until the next Friday, a warmer weather pattern is coming, however, Arctic winter is predicted to return.

The next Arctic invasion in the USA is forecasted already in the next weekend and on Monday, 13.-15. November 2021, with impressive temperature anomalies above central and south-central parts of the continent, below -12°C, maybe locally up to -20°C /-20- to -35°F/ (maps below).

In many parts of the USA appeared in the last 10 days the first snowing of the winter season and snow forecast is favorable for the northern half of the USA until 20. November, too.

Blizzard conditions according to current forecasts should surprise from lowlands e.g. a region of Minnesota, where according to tropicaltidbits tool, 14 inches / 36 cm of snow will be in the next 16 days possible.

Snow sleets should appear almost in all Missouri, too.

Coldwaves in the next weeks, approximately until 15. December 2021 across Northern Hemisphere should be linked mainly with the negative AO phase https://mkweather.com/be-prepared-for-an-extremely-long-and-strong-coldwave-arctic-blasts-in-europe-between-10-november-15-december-are-expected//

Winter in the USA and Canada is forecasted to peak around February 2021 /https://mkweather.com/winter-2021-2022-forecast-for-northern-hemisphere-an-awakening-solar-activity-la-nina-neutral-nao-ao-wet-mjo-and-iod-to-drier-mjo-and-iod-qbo-ne-pacific-warm-blob-aao//, while Christmas preliminary appears mostly warm /https://mkweather.com/the-1st-forecast-for-christmas-2021-warm-christmas-in-europe-north-america-and-asia//.

Mkweather will be furthermore watching the situation and bringing fresh news.

(Visited 309 times, 1 visits today)
Liked it? Take a second to support on Patreon!