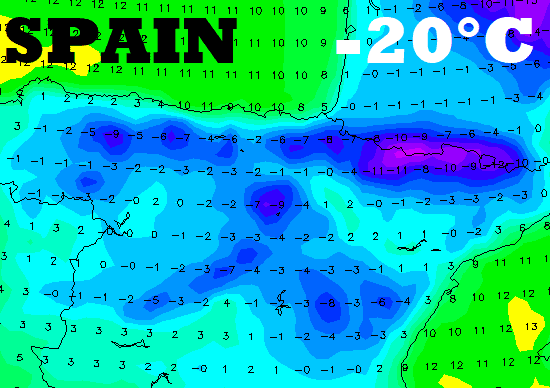 In Spain, mainly valleys elevated 500 – 1000 MASL in northern provinces or in the Pyrenees region, have chances for minimum temperatures in the interval -15/-20°C.

Frosts however should hit traditionally warmer parts of the country including Madrid.

Only the southern coast and coast of Portugal probably stay without severe frosts.

Moreover, most of the Iberian Peninsula should receive snowfall, or at least, the first snow showers of the season will appear.

In basins and valleys 500 – 1000 MASL, snow calamity is regionally possible.

In northern Portugal aren´t excluded frosts in the interval -5/-10°C rarely, but very dry air from Greenland, the Arctic, or Siberia must have good timing above the places with a snow cover.

In southern regions, severe storms, floods, hail, or even tornadoes should appear in the conflict zones between the Arctic and tropical air masses.