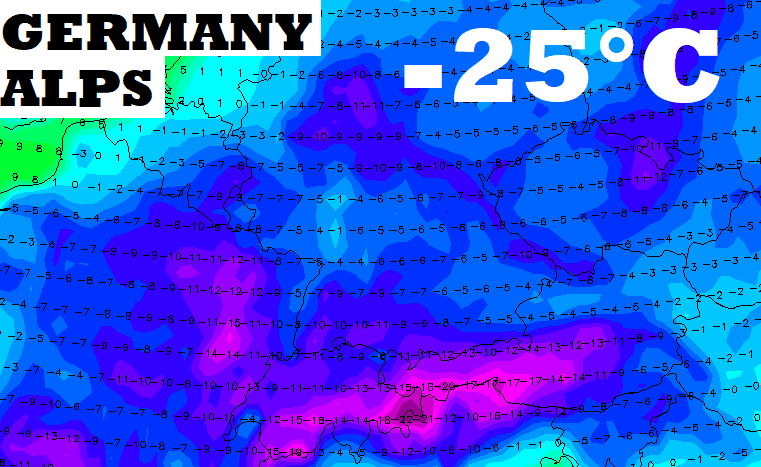 In Germany, the biggest probability of extreme frosts is in Bavaria, but minimum temperatures should fall into the interval -20/-25°C in central parts of the country, too.

Extreme frosts -10/-15°C should hit areas including the biggest metropolitan areas in Germany, Switzerland, and Austria.

In mountainous frost valleys above 1000 MASL in Italy, Austria or Switzerland, up to -40°C is very rarely possible thanks to microclimate, in densely populated villages and cities below 1000 MASL it will be “only” up to -25°C.

Ice days should appear almost in all regions, while very rare Arctic days are occasionally in basins and valleys, with foggy or cloudy and snowy weather, possible.

In Czechian famous frost basins and valleys, up to -30°C will be possible.

Severe frosts below -10°C are possible in continental parts of Denmark, too.

Extreme frosts very probably will pass the Alps and hit parts of Italy, too.

(Visited 192 times, 1 visits today)
Liked it? Take a second to support on Patreon!