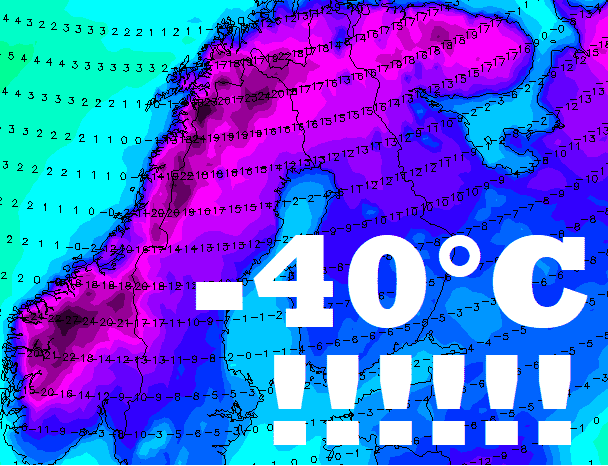 A reality in Scandinavia should be even more extreme, according to the newest GFS outputs with record November frosts, reaching in the coldest valleys and basins very close values to -40°C! (from values on outputs it’s needed to subtract up to 10°C for the reaching of an absolute TOP minimum temperature for the coldest valley).

All-time November Scandinavian historic records are moving between -40/-45°C and an upcoming coldwave, with air masses with origin in Greenland, the Arctic and Siberia should bring in the last November 2021 decade very similar temperatures, regionally with new possible all-time November temperature records!

Before an extreme coldwave, severe blizzard conditions are possible and in many places, the daily temperature should stay below -25°C.

The coldest weather is for now forecasted around 24. November 2021, but in the next days, it should be little changed, yet.

In continental Europe, GFS expects a potential up to -25°C in frost basins and valleys, in the UK, -15°C should in good timing an arrival of Greenland´s air, appear, or in Moscow region, the temperature should drop around -35°C.

Extreme winter conditions will be a result of a powerful AO-phase /https://mkweather.com/be-prepared-for-an-extremely-long-and-strong-coldwave-arctic-blasts-in-europe-between-10-november-15-december-are-expected//, which should be lasting almost until Christmas 2021, when, warming is preliminary possible /https://mkweather.com/the-1st-forecast-for-christmas-2021-warm-christmas-in-europe-north-america-and-asia//.

The coldest regions in Norway will be traditionally placed in Karasjok or Kaukoteino region, in Sweden in Kiruna and Gallivare region, and in Finland in the Inari region.

The surprise should bring “Oymyakon in southern Norway” – a village Folldal-Fredheim, with temperatures very similar such as that in Lapland.

Metropolitan areas of Oslo, Stockholm, or Helsinki should be a little warmer, but still with a possibility of Arctic days, with maximum temperature below -10°C during the peak of coldwave.

Extreme frosts and snowfall should hit according to the newest materials Portugal, Spain, Italy, Greece, or Northern Africa and later Turkey or the northern Middle East, according to long-term estimates.

Extreme frosts should bring life-threatening conditions not only in Scandinavia but across all continents, with extremely low real-feel temperatures during blizzards, especially in the mountains.

The situation on roads and highways should be significantly worsened, too.

Therefore take care, stay safe and watch furthermore Mkweather – we will bring fresh news about the forecasted extreme (and possibly record) winter period in Europe in the next days, too.

(Visited 600 times, 1 visits today)
Liked it? Take a second to support on Patreon!