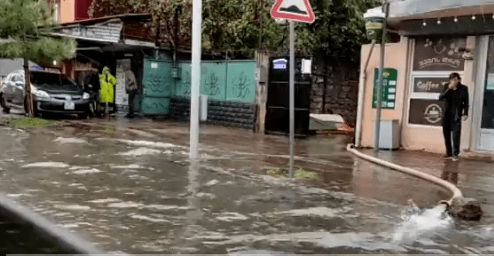 The worst situation was in northeastern Turkey and coastal Georgia, with anomalous rainfall and floods in metropolitan areas.

In the city of Hopa, northeasternmost coastal northern Turkey, 24-hour rainfall reported from Sunday to Monday, 3.-4. October 2021 reached 207,3 mm / 24 hours /https://meteologix.com/fr/observations/artvin/precipitation-total/20211004-0600z.html#obs-detail-170420/ and a similar situation should be in Georgian Batumi early this week.

60 mm / 24 hours was reported even from Haditha, northern Iraq.

In the next period, the next Mediterranean cyclones are expected, including a cyclone bringing a week-lasting flooding threat in Balkan /https://mkweather.com/a-week-lasting-flooding-threat-for-balkan-sicily-with-tornadoes-heavy-rains-and-damaging-winds-croatia-already-152-mm-14-hours-a-dangerous-mediterranean-low-will-shift-until-wednesday-13-10-a//. Remnants of this Mediterranean low should later affect the Black Sea region, mainly Ukraine and SW Russia, with the next powerful cooldown across Europe and later western Asia.

Forecasts for the first half of November are more NAO+ / AO+ /https://mkweather.com/silence-before-a-storm-and-the-last-summer-like-weather-before-an-extremely-cold-winter-the-first-half-of-november-should-bring-indian-summer-in-europe-canada-and-siberia-forecast-until-15-novemb//, but early Winter 2021/2022 should surprise with extremely cold weather across Northern Hemisphere /https://mkweather.com/russian-meteorologists-expect-extreme-winter-around-december-january-2021-22/; https://mkweather.com/winter-2021-2022-forecast-a-peak-near-nao-already-in-december-ne-pacific-warm-blob-nao-and-early-spring-in-february-north-america-oppositely-warm-start-cold-end-of-winter//.