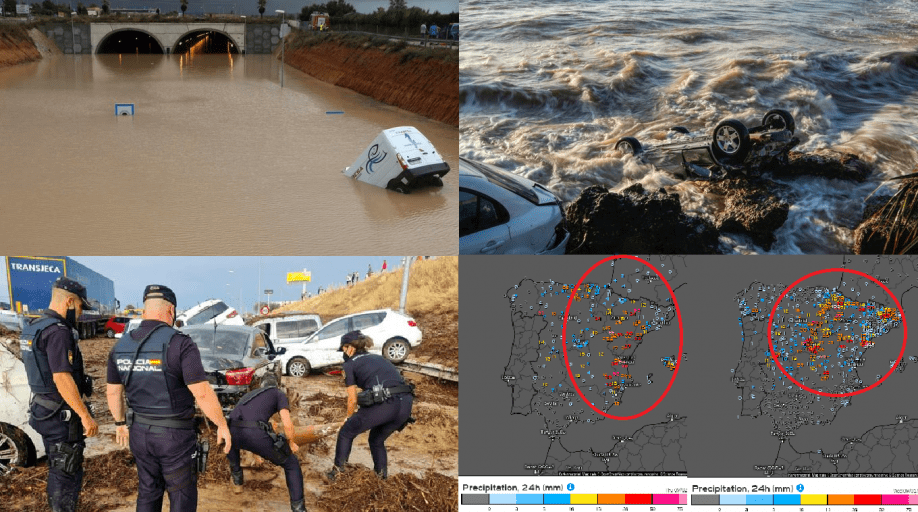 Cold Arctic air has shifted already into Southern Europe and while Balkan and Greece reported in the last days extremely cold mornings /https://mkweather.com/the-extremely-cold-air-is-already-in-southern-europe-greece-61c-north-macedonia-48c-romania-slovenia-34c-croatia-30c-2-3c-above-all-time-august-records//, Spain hit only in the last hours extreme floods, however, flooding situation has started here before a few days.

Before floods in Southern Europe Mkweather warned early, a few days ago /https://mkweather.com/flood-risk-in-the-southern-half-of-europe-in-the-next-period-cooldown-already-brought-floods-in-marseille-and-barcelona-regions-france-spain//.

Many provinces in Spain are in struggle and warnings before heavy rain are valid almost for all northern and eastern parts of the country, including the Balearic Islands.

The worst situation is in Barcelona, Valencia, Zaragoza, Toledo and Majorca regions, where were captured breath-taking videos and photos in Tweets below.

From southern regions, Barcelona reached the maximum temperature only +26,0°C, in Valencia +28,3°C, Ibiza +29,0°C, Murcia +29,8°C, or Alicante +29,9°C was measured and in the next days, daily temperatures should be even lower, regionally below summer value +25°C in holiday destinations.

Until 18. September, heavy rains and storms are expected mainly in northern Spain, but downpours with flash floods in central parts will be still possible /map below/. Storms into northern provinces should bring after 12. September ex-hurricane Larry /https://mkweather.com/the-first-significant-ex-hurricane-in-europe-possible-hurricane-category-4-larry-should-bring-danger-to-america-then-should-aim-towards-the-uk-france-ireland-benelux-norway-spain-or-portugal// – forecasts will be soon updated on Mkweather.

If you live in the region, watch current news, forecasts, warnings, and advisories, because the flooding event is expected to continue on Thursday – Friday, 2.-3. September, yet.

(Visited 111 times, 1 visits today)
Liked it? Take a second to support on Patreon!