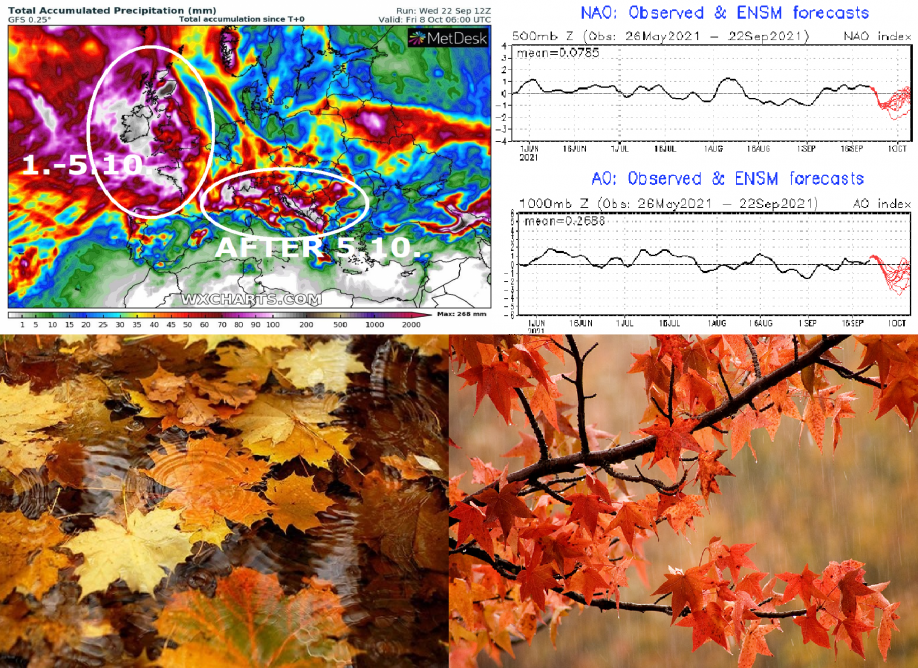 After a shorter period with an Indian-summer-like character between 25.-30. September in Europe /https://mkweather.com/continental-europe-indian-summer-will-be-shorter-25-30-9-in-october-will-come-colder-days// finally will come October 2021, but unfortunately, with colder synoptic situations for European mid-latitudes.

Some tropical days, above +30°C will be possible in all southern Europe, yet – from Iberia, through Italy, Balkan, Greece into southern Turkey, traditional moderate climate zone countries however stay in colder air.

Between 1.-5. October 2021 moreover a cyclonic system will be shifting above British Islands and western shores of Europe and this system thanks to the previous NAO- phase at the end of September 2021 should aim after 5. October 2021 to more southern areas – above the Alps, Italy, and Balkan, which should mean colder air northward from the cyclone.

Maximum temperatures mostly +5/+15°C are for continental Europe mostly forecasted, in France and Benelux temporarily around +20°C, in Belarus maybe later only 0°C.

Ground frosts will be probable, but severe frosts, for now, aren´t forecasted.

According to a 6-week forecast from ECMWF however, Indian summer should later return mainly into the western and partially central third of Europe /https://mkweather.com/ecmwf-6-week-forecast-until-1-november-2021-europe-north-america-world-more-indian-summer-in-key-regions//.

In Eastern parts of Europe and Siberia, however, should hit in the next week severe frosts prematurely.

Mkweather will try already around next week to update Winter 2021/2022 forecast, therefore stay watch weather with us.

(Visited 378 times, 1 visits today)
Liked it? Take a second to support on Patreon!