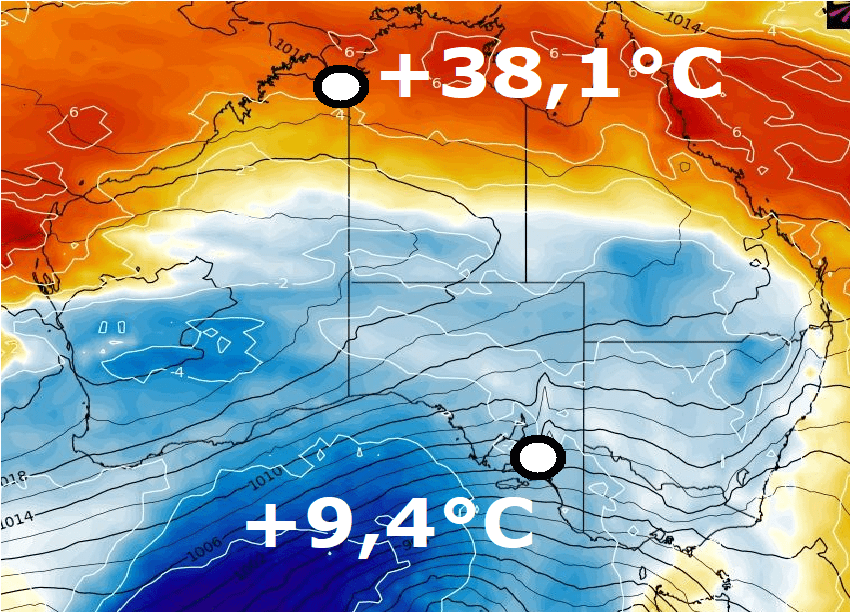 Very big differences between northern and southern Australia are bringing hot and cold temperature records across the continent.

The temperature contrast between the northern and southern coast is almost 30°C and while Kalumburu, the northernmost part of Western Australia, near the Northern Territory, reported +38,1°C on Saturday, 24. July 2021 (almost a new all-time Australian record of maximum temperature for July, 0,2°C missing), Adelaide in the south experienced on Thursday, 22. July 2021 with an anomalously cold day, with a maximum temperature of only +9,4°C, what is the coldest day in the city in all-time history!

While the southern half of Australia is supplied thanks to La Nina and negative IOD winter by anomalous Antarctic blasts, in the north according to expectations of seasonal forecasts, hot and drier weather is persisting during Summer 2021.

A powerful cold blast was observed in the last workweek even in Queensland, where 1/3 of the territory reported heavy frosts /https://mkweather.com/1-3-of-queensland-with-frosts-and-rare-snow-australia-faces-to-powerful-antarctic-blast-2021//.

Until Autumn 2021 and probably during the next summer season, too, the La Nina pattern will be the most important teleconnection affecting weather in Australia and Oceania, again with the above-average cyclone season, more wet and colder conditions until the first half of 2022.

Wildfires, drought, and heatwaves, therefore, will be rarer, but floods, tropical activity, and spider or mice season/plague, too, should continue, regionally /https://mkweather.com/after-spider-attacks-a-mice-plague-millions-of-mice-are-terrorizing-australia-2021/; https://mkweather.com/spider-invasion-in-australia-is-unbearable-2021-au//.