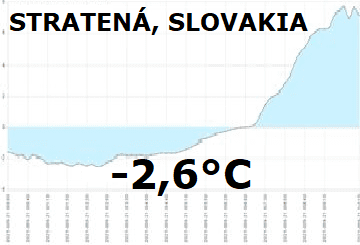 The coldest station in continental Europe during an ongoing coldwave below 1000 MASL in Slovakia!

Within the official, WMO indexed site, -2,6°C was measured in Stratená, Gemer region, central Slovakia on Wednesday, 22. September 2021, what is the lowest temperature in continental Europe, which has produced a current coldwave!

The station is moreover situated in the hills above populated frost basin, therefore, the temperature in the village should be even colder, around -3/-5°C.

Yesterday we wrote about temperature -1,1°C in Kakucs, Hungary /https://mkweather.com/the-first-snow-in-carpathians-lodz-poland-lowlands-almost-frost-07c// – this temperature is only 0,4°C from the all-time Hungarian daily record for 21. September!

Meanwhile, Tatranská Javorina, northern Slovakia, 1000 MASL, reports very cold September day, with temperature on 15:00 only +4,4°C and maximum daily temperature according to the graph below +5,0°C. In the morning, the station reported heavy rain or rain with snow only near temperatures around +3°C.

About the next temperature records measured in continental parts of Europe, we will inform already in the next 4 Mkweather articles.

After the coldwave, which will be lasting until Friday, 24. September 2021, a period with Indian summer-like weather will come from the weekend to Europe /https://mkweather.com/continental-europe-indian-summer-will-be-shorter-25-30-9-in-october-will-come-colder-days//.