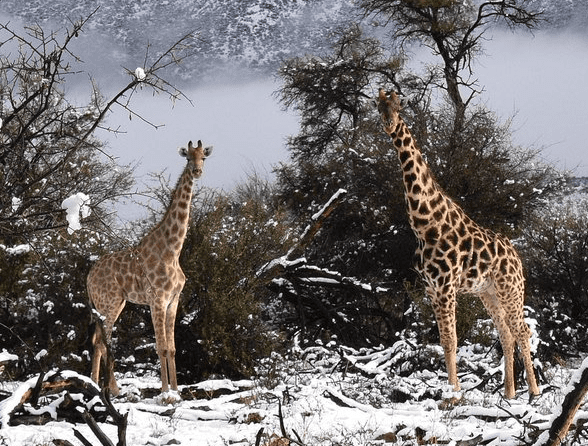 While Northern Hemisphere is bothered by abnormal heatwaves, South Africa, South America and Australia, Antarctica, such as eastern USA and Canada are reporting extremely cold times, in Southern Hemisphere with snowing and severe frosts.

Unbelievable photos from South Africa with giraffes and snowy nature around appeared on Twitter, after country expects severe Antarctic blasts until the end of June 2021.

According to earlier forecasts, 1/2 of South African territory should find itself under the snow according to /Snow possible from this weekend and early next week (snowreport.co.za)/, updated forecast say about heavy snowfall in southwestern South Africa and snowing in Lesotho and Drakensberg Mountains.

Although snowfall will be not so widespread such was forecasted, southeastern parts of the country should hit really strong frosts and temperature should drop between -10/-15°C in populated regions!

Temperatures below 0°C in 850 hPa means, that snowing should appear in lower situated regions at the night or in the morning, too.

Meanwhile, in Northern Africa, extremely hot weather is peaking, with temperatures up to +52,4°C in Algeria and +47,9°C in Tunisia /+52,4°C in Algeria! The first official European +50°C is possible! – mkweather; Tunisia +47,9°C, only 0,4°C below all-time June record! – mkweather/, with Saharan air not only above Italy, but too above northern parts of European Russia! /+46,0°C in Caltagirone, Italy (!!!) Dangerous, anomalous and deadly heatwave is peaking! Even stronger heatwave next week! – mkweather; Saharan air in Russia! +35,9°C in St. Petersburg and +34,8°C in Moscow! All-time June records! – mkweather/.

(Visited 131 times, 1 visits today)
Liked it? Take a second to support on Patreon!