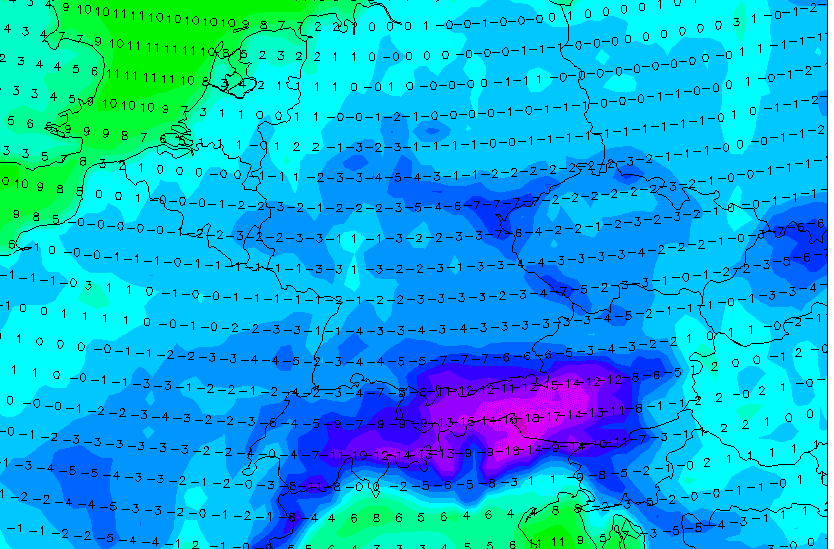 Outputs of GFS (the main runs from 12Z or 18Z), already 3 days in a row expected extremely winter for continental Europe and Balkan, with frosts in valleys up to -15°C /https://mkweather.com/winter-is-coming-an-extreme-arctic-blast-for-europe-temperatures-in-central-parts-and-balkan-should-reach-15c// and the first snowfall /https://mkweather.com/the-first-snow-in-europe-several-runs-of-gfs-are-extremely-cold//.

According to outputs from 8. October 18Z, extreme winter conditions hit in full power countries such as France and Germany and maybe the UK, too, with snowfall approximately across 1/2 of the territory of Germany, many regions in Central Europe and Balkan, and even stronger frosts in valleys.

While in lowlands, frosts below -5°C will be possible and in basins below -10°C should appear, the coldest valleys should according to the newest outputs attack extremely low -15°C, only a few days later, such as was forecasted before a few days.

Blizzard in the mountains and anomalously low windchill (real-feel temperatures) is still predicted and works on fields with harvest will be temporarily interrupted.

Coldwave should produce a worsening of virological situation and situation on roads should dramatically worsen, too.

After an extreme October cold blast, a long, almost a month-lasting Indian summer-like weather across Northern Hemisphere is forecasted approximately between 30. October – 25. November 2021, with peak in the first 2 November weeks /https://mkweather.com/20c-in-northern-25c-in-southern-mid-latitudes-in-november-2021-untraditionally-late-indian-summer-for-northern-hemisphere-is-confirming//.

After the last summer-like weather pattern of the year 2021, legendary cold December and early January 2021/2022 will be in the game according to seasonal forecasts /https://mkweather.com/winter-2021-2022-forecast-a-peak-near-nao-already-in-december-ne-pacific-warm-blob-nao-and-early-spring-in-february-north-america-oppositely-warm-start-cold-end-of-winter/; https://mkweather.com/russian-meteorologists-expect-extreme-winter-around-december-january-2021-22//.