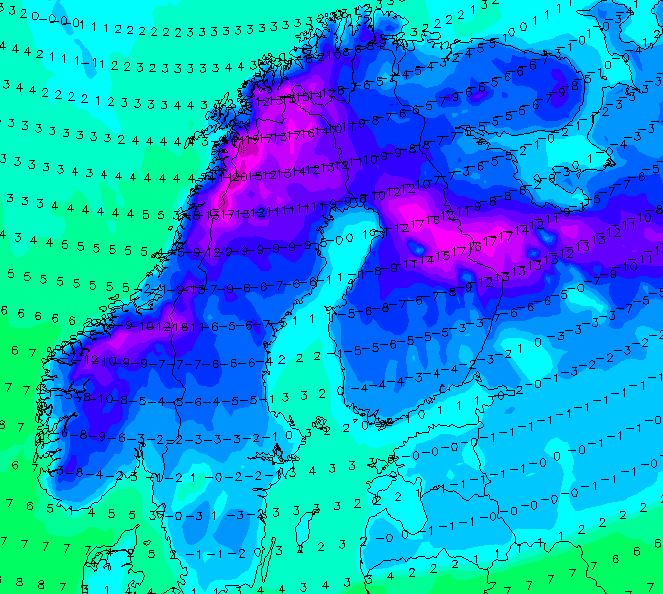 An upcoming coldwave in Europe we were trying to describe in the last Mkweather articles – the first snowing /https://mkweather.com/the-first-snow-in-europe-several-runs-of-gfs-are-extremely-cold// and frosts up to -15°C in the coldest valleys /https://mkweather.com/winter-is-coming-an-extreme-arctic-blast-for-europe-temperatures-in-central-parts-and-balkan-should-reach-15c// aren´t in continental parts and Balkan still excluded.

The last outputs were however even more surprising, with temperatures very close to the level of all-time October records in Scandinavian countries!

Temperature records in northern Norway, northern Sweden, and northern Finland and moving around -30°C (from the last October days probably) and very similar temperatures are forecasted for valleys in the northern Scandinavian Mountains already around 20.-24. October 2021!

Expected minimum temperature above northern Norway below -20°C means, that in the coldest valleys, around -28°C should be possible.

Extreme frosts very quickly hit all Sweden and Finland and -10°C will be according to surprising outputs possible in Baltic countries – Estonia, Latvia, and Lithuania!

Severe frosts soon or later hit parts of continental Europe and Balkan, too /links above/.

It appears, that expected cold Winter 2021/2022, mainly December 2021 and early January 2022 /https://mkweather.com/winter-2021-2022-forecast-a-peak-near-nao-already-in-december-ne-pacific-warm-blob-nao-and-early-spring-in-february-north-america-oppositely-warm-start-cold-end-of-winter/, note: winter forecast updated on Mkweather already in the next days/ will replace 2 periods in the second half of October and November 2021 – firstly the mentioned coldwave and then late-season Indian summer from the end of October to maybe 20. November 2021 /6-week forecast will be updated soon/ /https://mkweather.com/silence-before-a-storm-and-the-last-summer-like-weather-before-an-extremely-cold-winter-the-first-half-of-november-should-bring-indian-summer-in-europe-canada-and-siberia-forecast-until-15-novemb//.

If you live in Scandinavian and Baltic countries, we strongly recommend you to watch current weather news, forecasts, and advisories, because winter should begin prematurely, sharply, and with extremely cold conditions.