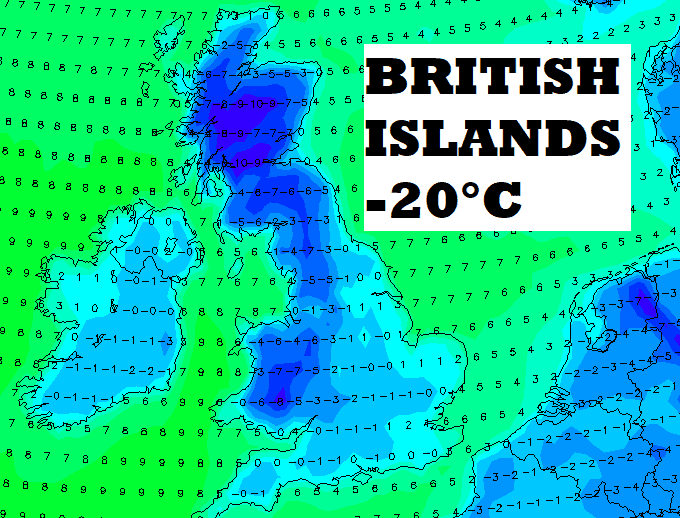 According to the last outputs in appears, the chance for minimum temperatures in the interval -15/-20°C in Scotland is much bigger than in previous days.

Moreover, frosts in the interval -10/-15°C should hit the coldest valleys in England and Wales.

Ireland should surprise with temperatures around -8°C in the case of a good timing of arrival of extremely cold and dry air masses from Greenland, with some help in the form of a local snow cover.

Severe frosts -5/-10°C are possible in some bigger, metropolitan areas in the British Islands, too, and frosts should appear almost across all territory of the UK and Ireland.

All-time November record -23,3°C from Braemar, Scotland, from 14. November 1919 appears to be impossible to overcome, but unseasonably cold air from Greenland should surprise, yet.

All-time November record for England has a value of -16,2°C, for Wales -18,0°C, and for Northern Ireland -12,2°C /https://www.metoffice.gov.uk/research/climate/maps-and-data/uk-climate-extremes/.

(Visited 171 times, 1 visits today)
Liked it? Take a second to support on Patreon!