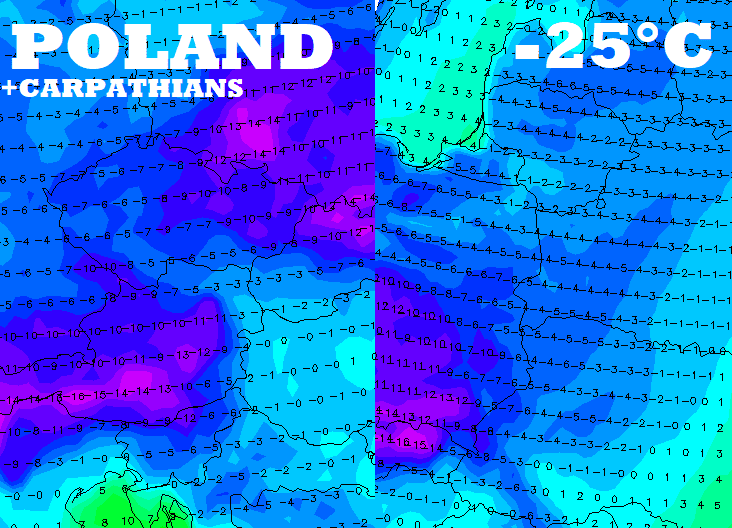 In Poland, the most extreme frosts /up to -25°C/ should appear in Carpathian valleys below 1000 MASL, mainly in Zakopane and Nowy Sadz region.

In Slovakian populated basins and valleys, 500-1000 MASL, similar temperatures of up to -25°C should appear, mainly in Orava, Spiš, Gemer, or Zamagurie region.

Czechian famous frost basins and valleys should report frosts in intervals between -25/-30°C according to estimates from the last GFS outputs.

Severe frosts should surprise the Carpathians in Hungary, too, with rare cooldowns below -20°C.

Used GFS outputs count with extreme frosts below -20°C in the densely populated metropolitan region around Bielsko-Biala in southwestern Poland, too.

In many metropolitan areas, frosts -10/-15°C should appear, too.

Frosts will be probably reaching up to the Baltic region, Belarus, Western Ukraine, and northern Balkan (mainly in Slovenia, Croatia, Bosnia, and Herzegovina, Serbia or Romania should be very strong, rarely below -15°C.

(Visited 159 times, 1 visits today)
Liked it? Take a second to support on Patreon!