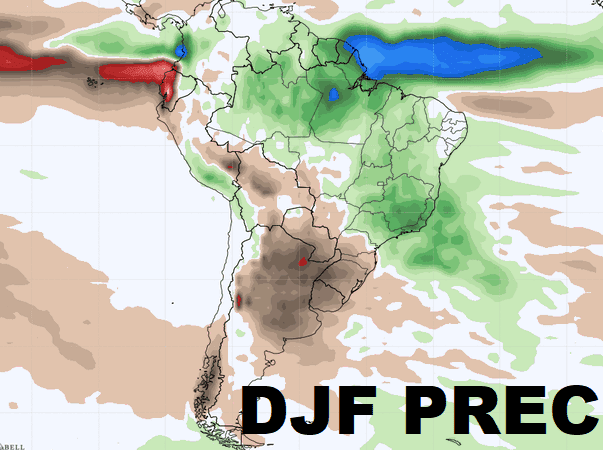 Dry summer will bring the second year in a row a circulation pattern associated with La Nina – it will be very hot and weaker fertile summer, with less production of grain and corn.

In early October 2021, however, the last winter season coldwaves appeared – the coldest was in Maquinchao with -8,0°C, Bariloche reported -7,5°C.

In Amazon, however, a very stormy summer season is expected, with possible floods and landslides.

Just a dry and hot anomaly from central Brazil is forecasted to shift in the next months southward, above South-American mid-latitudes and subtropical climate zone, while the season of rains is shifting from Colombia, Venezuela, and Guyana region above the northern half of Brazil.

The last report from the region /https://mkweather.com/a-scary-duststorm-hit-sao-paulo-while-paraguay-recorded-446c-and-uruguay-giant-hail/; https://mkweather.com/brazil-439c-and-paraguay-436c-regionally-with-the-hottest-days-in-history-el-nino-years-bring-even-worst-food-crisis-and-expensive-products-worldwide// are saying about a sand storm in the Sao Paulo region, extreme heatwaves in parts of Paraguay and Brazil, and large hail in Uruguay.

In central parts of the continent, temperatures already in late September and early October increased extremely highly, only 5°C below all-time continental records and it´s possible, that all-time records in the region will be threatened in the next months.