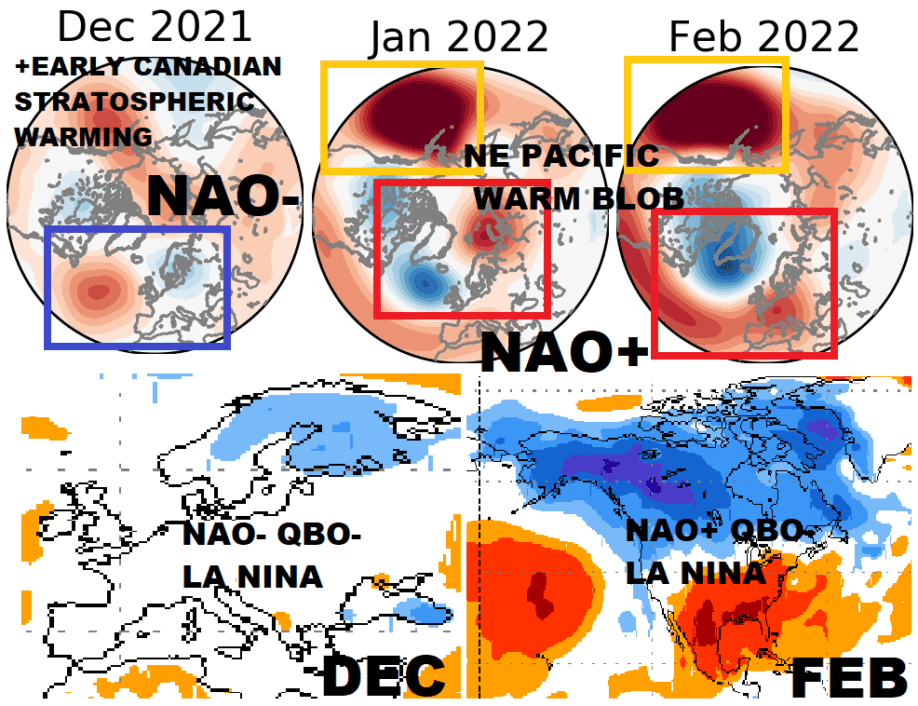 Winter 2021/2022 is coming and we are bringing the next update of predicted patterns for the winter season.

The last updates of the Winter 2021/2022 forecast we published here in August and September 2021 – and it really appears, that the upcoming winter will be peaking in Europe, Asia and North Africa around December 2021 and early January 2022 and in North America around February 2022 (forecasts are confirming): https://mkweather.com/winter-2021-2022-forecast-a-peak-near-nao-already-in-december-ne-pacific-warm-blob-nao-and-early-spring-in-february-north-america-oppositely-warm-start-cold-end-of-winter/https://mkweather.com/mkweather-special-forecast-for-the-next-3-seasons-cold-autumn-2021-warmer-winter-2021-2022-cold-spring-2021-for-europe-a-peak-of-winter-in-its-colder-first-half-north-america-with-extreme-cold-2021-20/; https://mkweather.com/winter-2021-2022-forecast-the-first-reliable-estimates-extreme-cold-blasts-from-canada-and-western-siberia-snow-in-western-europe-and-eastern-asia-la-nina-qbo-to-qbo-shift-sufficient-nao-ao/ and we published ENSO outlook, too /https://mkweather.com/2022-2023-forecast-chances-for-el-nino//. It is also worth mentioning the Russian forecast for Siberia for Winter 2021/2022 (agree with our forecasts) /https://mkweather.com/russian-meteorologists-expect-extreme-winter-around-december-january-2021-22//.

Although La Nina more correlates with AO+ and NAO+, colder Earth thanks to cold phase ENSO contributed to super-winter conditions in Europe, Asia, North America, and Africa during many weeks in the last winter.

Extremely cold conditions regionally – mainly in the Euroatlantic sector will continue during all Spring 2021, with late-season frosts and snowing and approximately 1 – 1,5 month shift of the growing season. This anomaly contributed to one of the 4 coldest summer seasons in the Arctic in the last 15 years, with 26% greater Arctic Sea Extent Anomaly such as in 2020 /https://mkweather.com/arctic-sea-ice-extent-26-greater-than-last-year-12th-lowest-on-record-and-the-largest-since-2014//. Winter 2021 in the South Pole was extremely cold, too /https://mkweather.com/the-south-pole-with-the-coldest-winter-in-history-average-temperature-april-september-half-year-only-610c//.

In Winter 2021/2022, similarly strong La Nina, such as the previous winter, is expected, but other parameters should bring extremely cold winter the Arctic and Siberian blasts in Eurasia and North Africa earlier – around December 2021, while the upcoming winter in North America is forecasted to peak around February 2022.

From NAO- to NAO+: the main reason of a difference between Eurasia/North Africa and North America

While in October, the negative phase of NAO and in November, the positive phase of NAO, will be dominant /links above/, in December 2021 according to the newest estimates /agree with all other previous Mkweather Winter 2021/2022 forecasts/ we should fall into a powerful NAO- / AO- phase, with severe cold blasts, mainly in Scandinavia (up to northeastern Turkey – see maps below), but too across all European continent, many parts of Asia and North Africa.

Although the temperature field on CFS maps for December is for Europe (and Asia, North Africa) mostly neutral, extreme frosts should really come – the highest chance will be during a Christmas or New Year´s Eve period.

From January into March 2022, a strong NAO+ anomaly will appear, which will be associated mainly with very warm conditions in Europe, Asia, and North Africa, but extremely cold conditions in Canada and the northern USA, with a possibility of late-season blizzards in all eastern half of the USA and neighboring Canada /see maps below/.

NAO- in December is predicted to be linked with a low geopotential anomaly above northern European Russia and weak Icelandic low (high geopotential), while January, February and March should bring deep pressure above Iceland and warm southern or western airflow above Europe.

This circulation pattern, with high geopotential in Canada in October and November (2021) was (is) often associated with subsequent NAO- phases in Europe, and in the last decades, it has brought legendary cold, -30°C frosts across European countries.

December is beginning already in 6 weeks, therefore, in a 6-week forecast from ECMWF, we will see soon, if cold times for December are really forecasted, or we will have to wait longer – until Christmas or New Year´s Eve.

An extremely high geopotential anomaly on the first collection of maps below marked by yellow squares is the so-called Northeastern Pacific Warm Blob.

This anomaly is forecasted to strengthen above the northern Pacific during Winter 2021/2022, with a peak around February 2022.

The pattern is bringing extremely cold conditions into Canada and the northern USA, but it´s associated with the NAO+ pattern and anomalously warm conditions in Europe, Asia, and North Africa.

Above Canada and the USA, a cold Arctic air is flowing on its front side, while Icelandic low is deep, Azores high strong, and the airflow above Eurasia and Northern Africa is western (or southern).

If we look at the behavior of QBO during the last months, we should notice only a slow shift across easterly quarters towards the westerly phase.

It´s very probable, that during the winter months we will stay in the cold easterly phase, which is a very good signal for the strength of coldwaves, mainly in late December 2021 and early January 2022, when we should be even in the stronger QBO- phase.

Last winter, we were at the beginning of easterly QBO.

MJO mostly dry until November, the end of Atlantic hurricane season should be weaker

A persisting wet MJO probably will stay above Southeastern and monsoon Asia during the next winter, too, with a stormy potential and high risk of floods.

However, above Northern Atlantic is forecasted in the next 40 days it´s so-called dry phase, with a neutral or worse potential for hurricane and tropical systems development – a probability of development for major hurricanes is therefore relatively low.

Dry MJO above Northern Atlantic is mostly associated with NAO+ and NAO+ really will appear together with late Indian summer conditions during the strongest dry MJO anomaly in November 2021. It will be however probably only silence before a storm – extreme cold blasts in the first half of Winter 2021/2022 in 3 continents.

(Visited 121 times, 2 visits today)
Liked it? Take a second to support on Patreon!