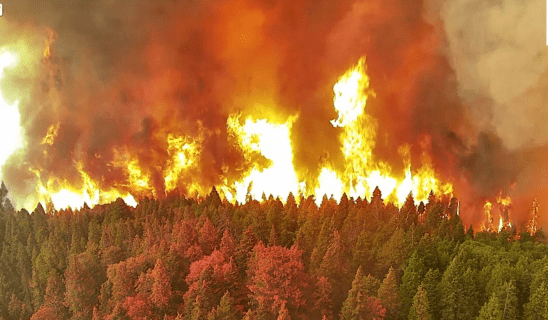 Mediterranean wildfires after heatwaves in Spain, Portugal, and southern France appeared not only in semi-desert areas but too in northern parts of the region.

While in Spain, the all-time temperature record (+47,4°C) was measured /https://mkweather.com/montoro-spain-474c-all-time-national-record-madrid-the-hottest-day-in-history-427c//, France reported +41,9°C /https://mkweather.com/american-model-returned-for-spain-50c-spain-462c-france-419c-so-far-all-time-spain-record-is-473c//, which was an initial factor of severe wildfires in French Riviera in the last few days.

Wildfires destroyed around 13 000 acres and caused 2 deaths and 27 injures, several residences near Saint-Tropez were evacuated and many precious ecosystems were destroyed.

An important factor was severe wind, too.

Against wildfires were fighting around 1200 firefighters and the region is waiting for better conditions caused by coldwave, which hits Europe in the next 2 weeks /https://mkweather.com/the-next-2-weeks-without-summer-a-big-arctic-forecast-for-european-cities-maximum-temperatures-locally-10c-damages-on-sensitive-plants-frosts-a-worsening-of-virological-situation-diffic/; https://mkweather.com/10-15-day-coldwave-for-europe-maximum-temperatures-only-8-14c-regionally-and-the-first-frosts-in-valleys/; https://mkweather.com/the-first-siberian-blast-in-europe-already-at-the-end-of-august-the-first-frosts-and-ground-frosts-in-valleys-and-basins//.

One of the worst wildfire seasons is reported in 2021 from many parts of the Mediterranean – the worst was the situation in Turkey or Algeria, but too in Greece, Italy, Spain, Balkan, or other North-African countries.

After a long-term coldwave, which partially hits the Mediterranean, too, hot weather is forecasted to return to Europe during September 2021, with a possible regeneration of wildfires.