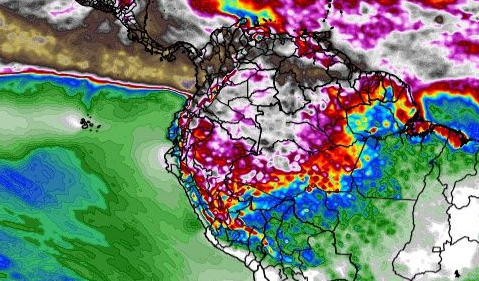 The next damaging floods appeared in northern South America – in Colombia and Trinidad and Tobago in the last days.

50 000 people of whom 6000 are refugees from Venezuela, were affected by severe floods in the Arauca department, Colombia, in late July and early August 2021. Wash, shelter, food & health needs and severe damages to infrastructure in the affected area are reported.

Maraval, located north of Trinidad and Tobago´s capital Port of Spain, suffered flash flooding after heavy rains in the region, too.

Forecasts for the region are bad – all southern Central America and northernmost parts of South America will receive large amounts of rain from storms until the end of August 2021.

The worst situation should be in Colombia, Panama, and Costa Rica, where already severe floods appeared in the last weeks, thanks to the location of the Intertropical Convergence Zone northward from Equator /https://mkweather.com/floods-hit-costa-rica-50-200-mm-rainfall-reported/; https://mkweather.com/bocas-del-toro-panama-with-severe-floods-2021//

Very bad should be regionally situation in the next Central America countries, Venezuela, Guyana region or even northern Amazon.

Meanwhile, Peru and Bolivia are after rare snowfall and from Patagonia is shifting northward an unusual winter heatwave /https://mkweather.com/bolivia-and-peru-under-the-snow-snowing-appeared-in-metropolitan-areas-too//. E.g. in Bariloche, winter center in Argentina, already +23,4°C during the heatwave was in the last days measured.