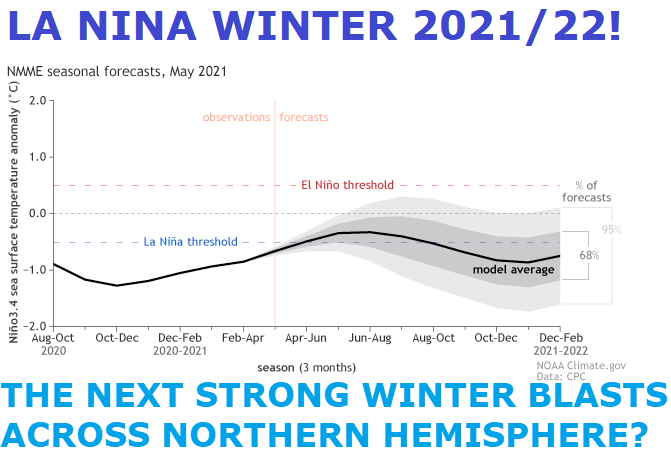 Although temperature anomalies during relatively cold La nina winters are not everywhere in the Northern Hemisphere negative, La nina is giving big hopes for the strong Arctic and Siberian outbreaks across all Northern Hemisphere in Winter 2021/2022, similarly, such as during the last, Winter 2020/2021.

As we have shown in the last Mkweather article, La nina is relatively strongly associated with weak solar activity /https://mkweather.com/solar-cycle-behind-nao-coldwaves-in-europe-and-la-nina-coldwaves-around-the-world-2021//. Minimum of the solar cycle is simultaneously associated with stronger NAO- and AO- phases, although, stronger correlation ranks between La nina and NAO- / AO- haven´t been confirmed.

In developing countries, La nina is associated mostly with periods of rains, which has a better effect on agriculture such as hot El nino with drought or wildfires.

However, in Summer 2021 we will be relatively close to the neutral ENSO phase, which should be associated with overall warmer conditions around the Earth.

Autumn is bringing in last years cooling trends of temperature across key mid-latitudes, thanks to the response to the Arctic-related circulation mechanisms and colder conditions in mid-latitudes, with often NAO- October phases, should mean the next effects to southern climate zones, reciprocally, with a result of return into stronger La nina conditions.

Expected stronger Hurricane season 2021 will contribute to the autumn return of La nina, too, because hurricanes and tropical storms will be cooling the North American and Euro-Atlantic sector, with some contribution into the global climate system, too.

Until winter months 2021/2022 therefore we should fall into the next relatively strong La nina pattern again, still with relatively weak solar activity and numerous strong volcanic eruptions VEI4 – VEI5 in the previous period.

Around 70% of La nina years are bringing powerful Major SSWs (Major Sudden Stratospheric Warming), therefore if we will have a luck in the middle of winter again, extreme, in continental Europe 30-degree, in the USA 40-degree and in Siberia 60-degree frosts should hit after a one-year break, after relatively cold Winter 2020/2021, cold Spring 2021, hot Summer 2021 and cooling in Autumn 2021.