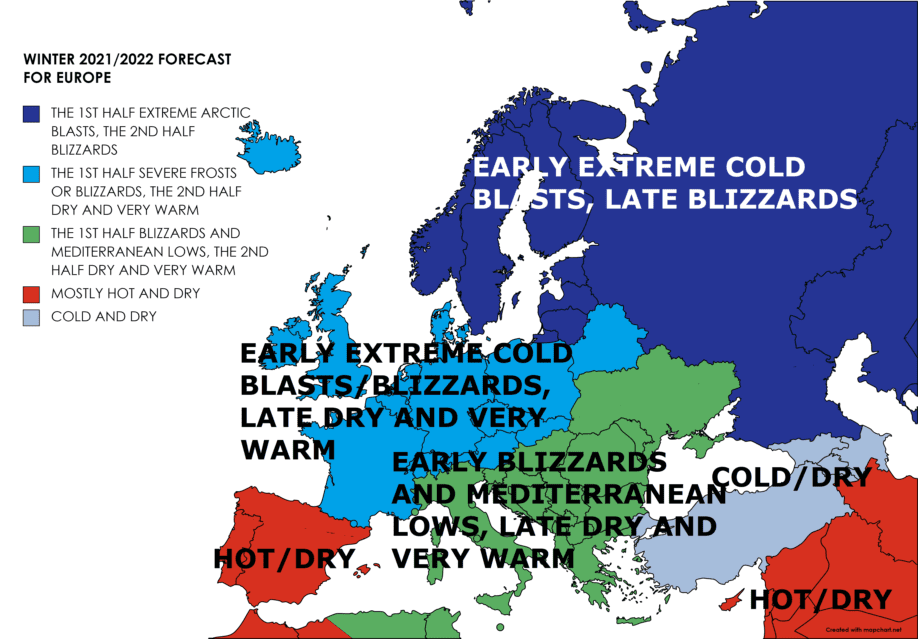 In this article we will look at forecasted Winter 2021/2022 conditions in Europe.

Such as we detailed analyzed in the last Winter 2021/2022 forecast for the Northern hemisphere / https://mkweather.com/winter-2021-2022-forecast-extreme-frosts-in-eurasia-in-december-in-north-america-in-february-early-canadian-stratospheric-warming-ne-pacific-blob-la-nina-qbo-and-shift-from-nao-to-nao-such-le/ /, 6 (+1) main teleconnection patterns will be affecting conditions during an upcoming winter:

Now, we should look at a forecasted map for Winter 2021/2022 for Europe and 5 main sectors, with similar regimes of weather:

A) SCANDINAVIA, BALTIC REGION, RUSSIA: Thanks to NAO- and AO- conditions during December 2021 and January 2022, extreme Arctic and Siberian blasts will be very probable, together with a drought. During the second half of winter, near NAO+, very warm conditions, but still enough for powerful blizzards will be persisting above the region. During extreme cold blasts during Christmas time, around -45°C frosts should surprise Scandinavian countries, while the second half of winter should be very warm, up to +18°C in southern parts.

B) CONTINENTAL EUROPE, BRITISH ISLANDS, ICELAND: In Northwestern Europe will be continental the early Arctic and Siberian blasts little calmer such as above the continent and limited duration, but still with a possibility of extreme peaks across continental Europe (and maybe shortly northern Spain and Portugal, or Balkan, too). Cold blasts will be gradually in the region alternated with blizzard conditions around January 2021 and finally, in late January and February, anomalously warm and dry weather, gradually even spring-like weather should come into the region. The first NAO- half of the winter should bring -30°C cold blasts, while in the second half, +20°C should be measured in northern and +25°C in southern mid-latitudes. ***An exception will be Iceland, with late blizzards (not warm and dry).

C) BALKAN, GREECE, ITALY, UKRAINE, TUNISIA, ALGERIAN COAST: This cluster of countries should be associated with increased activity of Mediterranean lows during the first half of Winter 2021/2022, with blizzard conditions and shortly Arctic / Siberian cold blasts, too. January and February however should be very warm, in southern parts maybe hot. Temperatures should drop up to -25°C in December 2021 (Europe, Africa warmer) and rise to +25°C, in the African coast up to +30°C in February 2022. Ukraine should be colder.

D) TURKEY AND CAUCASIAN REGION: A little cluster with cold and dry conditions is forecasted for Turkey and Caucasian countries, or southwesternmost Russia, respectively. Dry conditions during the winter should push minimum temperatures at the nights below zero, with a resulting effect of severe frosts. However, mainly in December, although models don´t see it now, should be possible some blizzards in the first half of the winter. It will be a region, with cold periods from the north such as hot periods from the south, but dry and colder/neutral patterns should be leading.

E) IBERIA, MOROCCO, SAHARA, MIDDLE EAST…: Hot and dry conditions with temporary summer days above +25°C are forecasted mainly for the southern half of Spain and Portugal. Very hot and dry should be the Middle East, Morocco, and Sahara, with a possible peak of winter in the first half, during NAO- phases, with severe frosts and Mediterranean lows in Europe. Northern Iberia, such as the Atlas region and the northern Middle East should receive during these periods some snow and frosts despite the overall hot and dry character of winter.