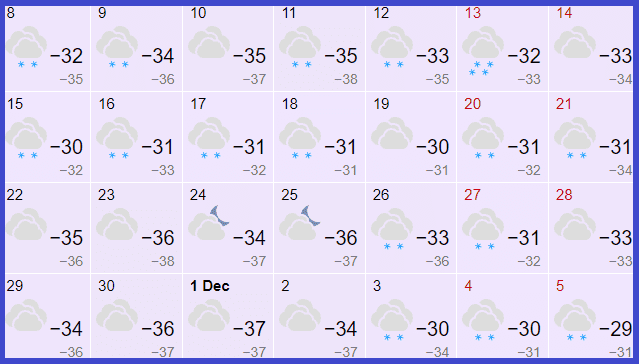 In two previous articles, we were informed about an expected severe cooldown in Europe and parts of the Northern Hemisphere, which is forecasted thanks to transition into AO- phase (negative phase of Arctic Oscillation) during the long period of 10. November – 15. December 2021 /https://mkweather.com/be-prepared-for-an-extremely-long-and-strong-coldwave-arctic-blasts-in-europe-between-10-november-15-december-are-expected/; https://mkweather.com/winter-will-come-earlier-than-was-forecasted-30c-in-scandinavia-20c-in-central-europe-and-10c-in-british-island-around-10-november-is-possible//.

For the purposes of verification of our predictions, we have in this article looked at forecasted 42-day conditions in the wider European region.

From forecasted conditions /source: https://www.gismeteo.com/weather-vorkuta-12972/month// is evident, that everywhere, from Sahara and the Middle East to Siberia, Svalbard, and Greenland, there is forecasted significant cooldown.

In Greenland or Siberia, frosts up to -40°C or below -40°C should appear (reality should be a little colder than model outputs).

According to Mkweather estimates, -30°C and lower is forecasted for Scandinavia, -20°C and lower for continental Europe, and below -10°C for British Islands (Scotland) during the peaking of the long, 35-day period.

Arctic air will gradually shift above southern Europe and Turkey, too, with possible weak frosts or occasional snowing.

Arctic air and Mediterranean lows hit parts of Northern Africa and the Middle East, too, and it is possible that cold air thanks to AO- / SAM-/ NAO- modes will bother parts of North America and Asia (USA, Canada, northern Mexico, China, India), too.

The difference in many regions between the start of November /https://mkweather.com/november-heatwave-hits-europe-germany-25c-france-30c-spain-33c/; https://mkweather.com/any-extreme-frosts-ukraine-romania-or-serbia-with-abnormal-28c-around-5-november// and the end of the month should be regionally 10-20°C, which is a significant change during a few weeks.

Therefore, stay warm and safe and watch furthermore our news, forecasts, and advisories.

(Visited 380 times, 1 visits today)
Liked it? Take a second to support on Patreon!