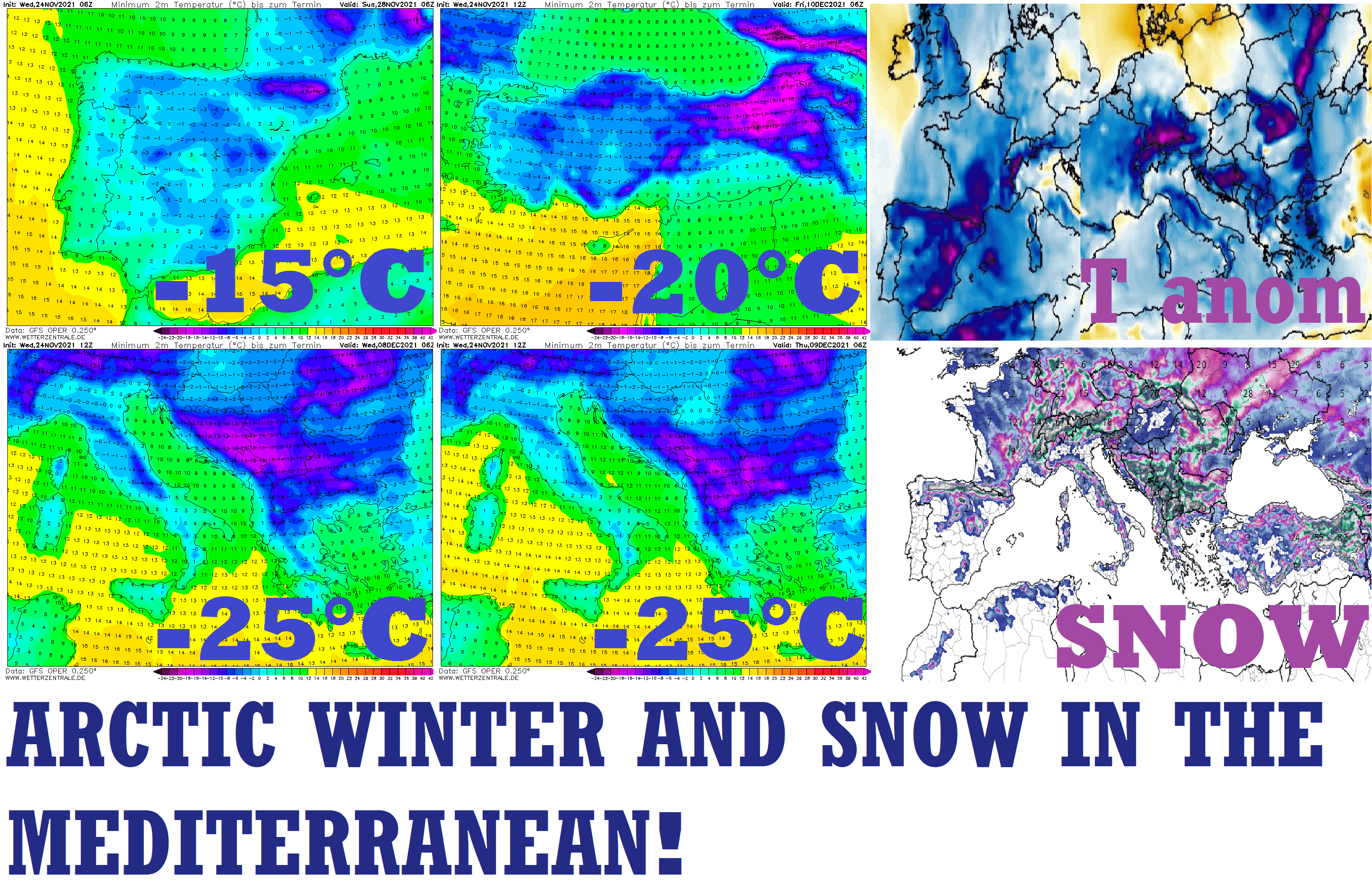 -15°C in Spain, -20°C in Turkey, and -25°C in Balkan in densely, lower situated, populated, basins and valleys! Balkan under tons of snow!

Severe and life-threatening frosts at almost -40°C are in the next period forecasted for Scandinavia /https://mkweather.com/finland-290c-although-gfs-saw-only-20c-according-to-this-logic-40c-in-scandinavia-is-in-the-next-period-possible//, while in continental Europe, -25°C should be measured, soon /https://mkweather.com/arctic-frosts-up-to-25c-hit-the-region-from-france-to-ukraine-continental-europe//.

Similar temperatures, from -20°C to -25°C should be measured in Balkan, too, mainly in Romania, Moldova, Serbia, Slovenia, Croatia, Bosnia and Herzegovina or Northern Macedonia, in lower situated and densely populated basins and valleys below 1000MASL!

Extremely low temperatures, below -15°C are however very possible in mountainous parts of Greece, Bulgaria, Albania, Montenegro, or Kosovo, too.

Similar temperatures, up to -15°C are possible already around Sunday, 28. November 2021, in Spain, on the same day as possible -20°C in British Islands /https://mkweather.com/20c-in-the-uk-already-this-weekend-its-very-close-to-102-year-all-time-record//.

Above Turkey, extremely cold air will come a little later, between 5.-10. December, with a possibility of -20°C and lower temperatures in densely populated basins and valleys.

Meanwhile, snowfall around 1000 MASL and frosts up to -10°C are possible in the Atlas region, Morocco, Algeria, and Tunisia.

In Syria, Lebanon, Israel, Jordan, Iraq, Iran, Saudi Arabia, Libya, and Egypt winter is forecasted to come later, approximately around 10. December 2021, with rains, rare frosts, and snow in the mountains.

Severe frosts and snowfall should regional across the Mediterranean appear in coastal areas, too.

Blizzard conditions are forecasted mainly for many parts of Balkan //https://mkweather.com/europe-under-the-snow-heavy-blizzards-on-the-way-in-these-regions-a-risk-of-snow-calamity//, with 10 – 50 cm, rarely more than 1 meter of snow below 1000 MASL, deep snow cover should appear in Spain, Portugal, Italy, Greece, Turkey, Caucasus or North Africa in elevations around 500-1000 MASL regionally, if not in the next 16 days, so until Christmas 2021.

Frosts should be mainly in mountainous regions and near long outdoor activities health or even life-threatening, therefore stay safe, warm and watch current weather news, forecasts, warnings, and advisories.

Above northern parts of the Mediterranean, T850 hPa -5/-10°C, in northern Balkan rarely below -10°C is forecasted.

It appears, that severe frosts should be continuing until New Year 2022 – Mkweather brings long-term outlooks updates for Europe already in the next articles.

During the next period, we will be bringing overviews of temperature records and updates of the next extremely cold outputs, furthermore.

(Visited 529 times, 1 visits today)
Liked it? Take a second to support on Patreon!