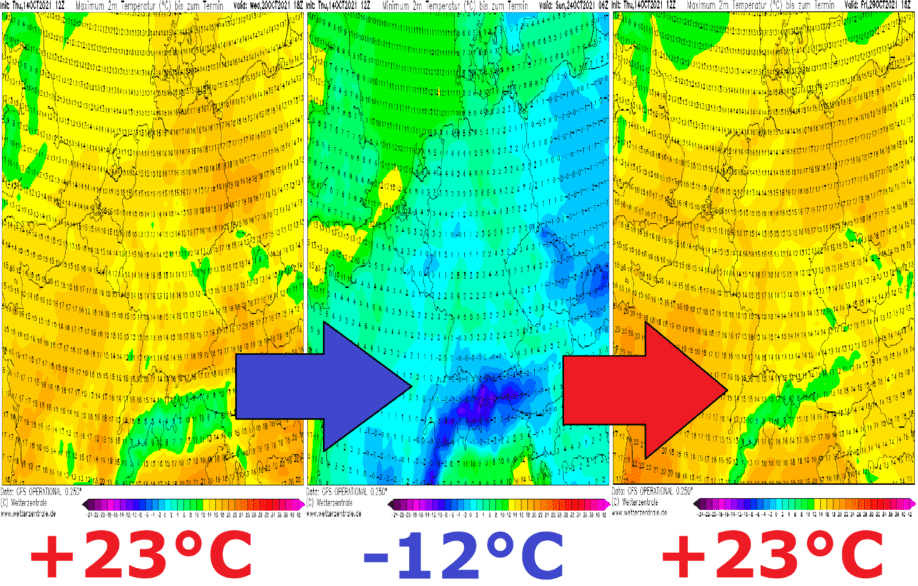 An announced Indian summer in Europe in the last 12 October days plus the first half of November 2021 should experience a little, very short, but intensive cooldown(s).

Simultaneously with a 12-day period of Indian summer in the last 12 October days, an extreme, maybe -30°C coldwave is forecasted for Scandinavia /https://mkweather.com/extreme-frosts-in-norway-sweden-and-finland-are-confirming-30c-minimum-and-15c-maximum-temperatures-are-possible//.

And just this extreme coldwave, should according to the newest materials interrupt an Indian summer in the Alps, East-Central, Eastern Europe, and northeastern Balkan, with the next severe frosts around 24. October 2021.

While Indian warm spells should be peaking around 20. and 29. October, with maximum temperatures in Central Europe around +23°C, the mentioned coldwave should bring severe frosts mainly into Alpine and Carpathian basins.

In the coldest frost valleys, below 1000 MASL, up to -12°C will be possible, mainly in Slovakia, southern Poland, Czechia, Austria, or Switzerland.

Maximum temperatures in foehn localities on northern slopes of mountains should be during this coldwave surprisingly around 20°C lower (from +23 to +2°C), such as during southern, foehn airflow before and after a cold blast.

In lowlands or southern slopes, this cooldown won´t be so strong such as in foehn regions.

If you choose to dress in a summer style, don´t forget to look at current weather news and forecasts, because late-Indian summer should be sometimes surprisingly cold, mainly after a sunset, when temperatures in the evening are dropping down very sharply.