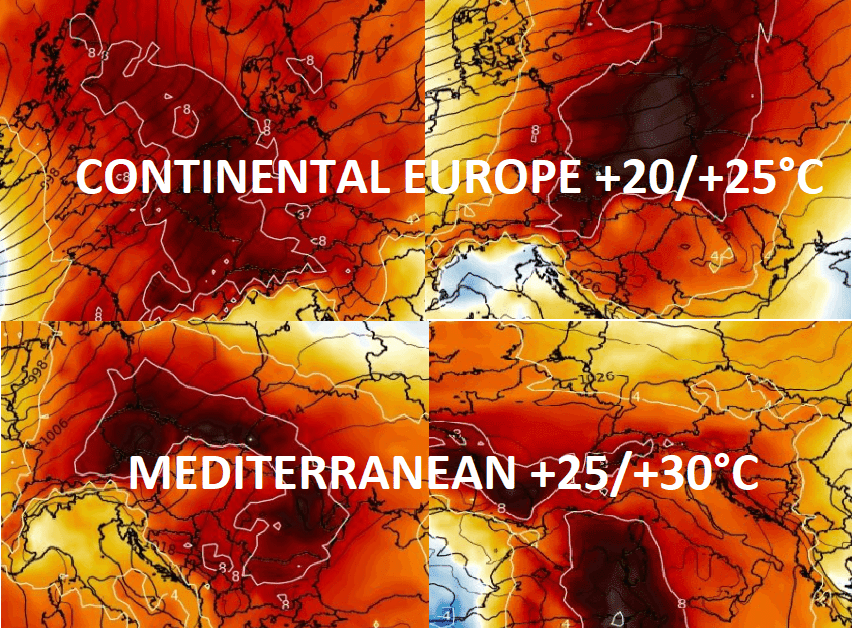 An extremely warm 3-4 week lasting period in late October and early November 2021 should bring many temperature records and foehn-related surprises into many parts of Europe from the Mediterranean to British Islands, southern Scandinavia, and the Baltic!

Already in the previous article, we were informed about expected absolute regional/national temperatures in European regions/countries /https://mkweather.com/indian-summer-soon-back-spain-portugal-34c-italy-france-turkey-30c-balkan-27c-germany-hungary-ukraine-25c-benelux-central-europe-23c-british-island// already around 19.-23, October 2021.

In the article /https://mkweather.com/november-should-start-with-summer-weather-record-temperatures-25c-in-continental-europe-are-possible// we forecasted, that at the start of November 2021, extremely warm, summer days, above +25,0°C should appear in continental Europe, e.g. Germany and that the hottest parts of the Mediterranean should still report above tropical +30°C.

These waves of Saharan air should bring in many countries in continental Europe (from France to Ukraine) maximum temperatures from +20 to +25°C during the peaks of advection of African air.

In England, up to +23°C should be measured during the first wave, but warm weather will return here only at the end of the month. Southern Scandinavia and the Baltic region should see the last +18°C of the season.

The hottest will be in Spain, Portugal, southern France, Italy, Balkan, and Turkey, with regional peaks up to +25/+30°C, in southern Spain and Turkey maybe around +32°C.

Extremely warm nights near foehn winds, with minimum temperatures around +18/+12°C, should appear not only in southern, regions but in the far north, too.

Anomalously “November heatwave” should peak in the first November 2021 decade /https://mkweather.com/november-should-start-with-summer-weather-record-temperatures-25c-in-continental-europe-are-possible// and in some parts persist during the second November 2021 decade, yet, but the end of November, December, and early January should already bring extremely cold winter conditions according to current estimates /https://mkweather.com/winter-2021-2022-forecast-extreme-frosts-in-eurasia-in-december-in-north-america-in-february-early-canadian-stratospheric-warming-ne-pacific-blob-la-nina-qbo-and-shift-from-nao-to-nao-such-le/; https://mkweather.com/winter-2021-2022-forecast-a-peak-near-nao-already-in-december-ne-pacific-warm-blob-nao-and-early-spring-in-february-north-america-oppositely-warm-start-cold-end-of-winter/; https://mkweather.com/russian-meteorologists-expect-extreme-winter-around-december-january-2021-22//.