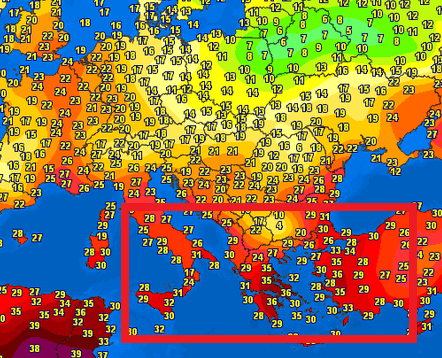 Only before a few days, we were informed about extremely hot, tropical, weather in Balkan and southern Central Europe /https://mkweather.com/the-last-tropical-days-north-macedonia-356c-bosnia-and-herzegovina-352c-albania-341c-croatia-340c-serbia-336c-slovenia-329c-bulgaria-327c// and in the second half of the week, the heatwave has shifted above southernmost parts of Mediterranean, with anomalously high temperatures.

North Macedonia reported on Thursday, 16. September 2021 after an update +36,2°C in Gevgelija.

Hot weather in the region – mainly in Greece, Turkey, and Cyprus, where many people are still on vacations, is forecasted until Tuesday, 21. September 2021.

Then, severe coldwave hits all regions of the Eastern Mediterranean – European part, Turkey, the Middle East, and even northeastern Africa, therefore, vacations will be affected by the worsening of the weather.

Warmer weather in the next weeks is possible mainly in Portugal, Spain, and southwestern France /https://mkweather.com/forecast-for-europe-for-the-period-15-september-25-october-2021-western-europe-lot-of-indian-summer-east-severe-frosts/; https://mkweather.com/ecmwf-6-week-forecast-until-25-october-europe-north-america-and-world//.

The same coldwave, which will bring severe cooldown, rain, and winds into Eastern Mediterranean, early next week should bring the first snowing in Central Europe in lower situated populated basins and valleys below 1000 MASL /https://mkweather.com/maximum-temperatures-only-3c-and-the-first-snowing-around-800-masl-in-central-europe-already-next-week//.