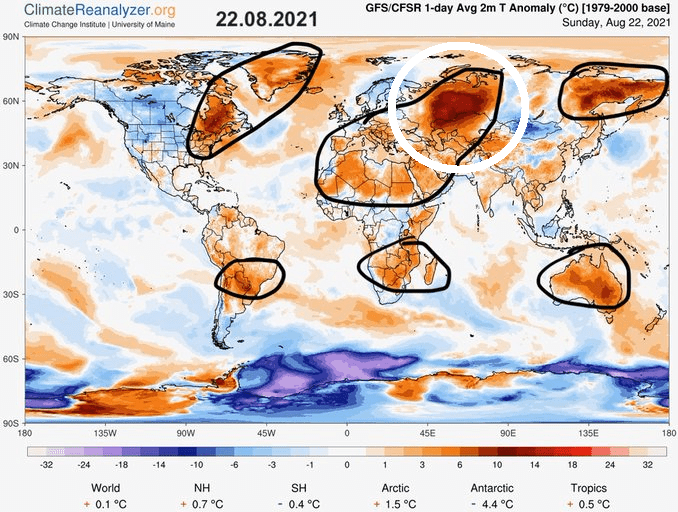 Pressure high is bringing extremely high temperatures into anomalously northern areas, e.g. in Yelabuga at 55°N according to /https://twitter.com/extremetemps/, record +39,2°C was measured.

A year ago, Oymyakon experienced the first -10°C of the season /https://mkweather.com/oymyakon-96c-147f-36c-from-absolute-august-record-this-year-the-autumn-season-came-to-the-republic-of-yakutia-early//, therefore for northern parts of Russia are mentioned temperatures in the 3rd August decade exceptional.

Many parts of Siberia are still bothered by extensive wildfires and heatwaves are continuing in parts of Central Asia – before a few days, in the border region of Kazakhstan and Russia, around +42°C was measured.

Dangerous fire conditions from the Volga region due to extreme heatwave from Central Asia were in the last days reported, too.

Persisting drought in parts of Central Asia and Siberia is bringing water shortages, production of some plants is in a big danger, e.g. wheat /https://www.rferl.org/a/central-asian-drought-water-shortages/31324012.html/.

European coldwave in late August and early September 2021 hits European Russia and northern Western or even Central Siberia, too, with the first possible frosts and ground frosts of the season 2021/2022, possibly not so far from Moscow.