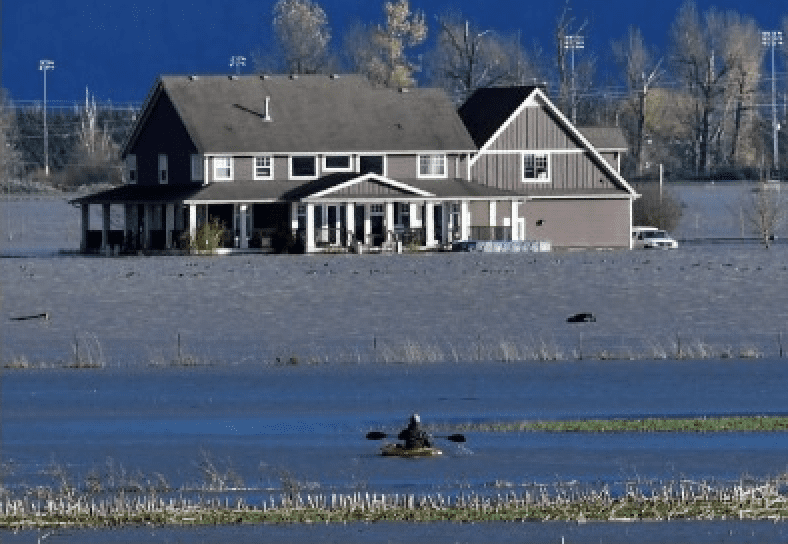 Parts of British Columbia, mainly the Vancouver region and northwestern Washington state, such as some parts of Oregon were hit in the last days by historic floods.

From 14. to 15. November, in some places near Vancouver, fell almost 600 mm of rainfall and heavy rains were continued almost all last week. In Hope, British Columbia, 294,3 mm fell between 13.-15- November and in some regions, a situation was considered such as a “Once-in-500-year flood event”.

Farmers in western Canada used jet skis and boats to rescue cattle stranded by rising floodwaters. Thousands of farm animals have died and British Columbia has been declared a state of emergency caused by devastating floods and landslides.

Minimally 4 people in the Canadian part are dead after persisting floods.

California before the arrival of rains experienced very hot temperatures up to 99°F / +37,2°C /https://mkweather.com/california-with-extreme-late-season-heatwaves-orange-county-and-san-bernardino-99f-372c//.

The very bad situation along the Canadian Pacific coast and in Washington state should be persisting minimally until 7. December 2021, when next up to 32 inches /up to 1000 mm of rainfall is forecasted.

So intensive rains should bring widespread floods and landslides, with damaging infrastructure and causing fatalities, furthermore.

In the mountains, extreme amounts of snowfall are possible.

Materials associated with Winter 2021/2022 forecast for North America you should find here: https://mkweather.com/winter-2021-2022-forecast-for-northern-hemisphere/ – in Western Canada and Alaska, a peak of winter is forecasted thanks to many favorable parameters around February 2022 – atmospheric rivers from the Pacific, therefore, should be shifting during the winter to more southern areas (US Pacific coast from California to Washington state).