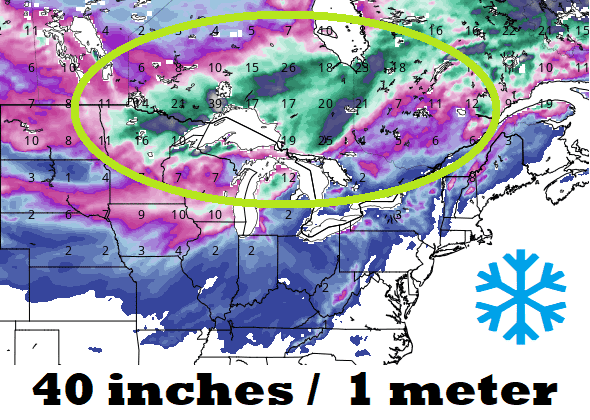 Already in the last week, the Great Lakes region hit the first blizzard of the season, with 14 inches / 36 cm of snow in Michigan, the USA (thanks to the so-called “lake snow effect”): https://mkweather.com/great-lakes-the-usa-with-36-cm-14-inches-of-snow/ and 103 million people in the USA were suffering freezing temperatures /https://mkweather.com/103-millions-americans-under-freezing-weather-the-next-severe-arctic-invasion-already-next-weekend//.

After approximately a week-lasting warmer weather, the next severe blizzard is already forecasted and it appears, that it will be even stronger, with extreme snowfall records in the wider Great Lakes region.

Mainly western parts of Great Lakes and southern Ontario, Canada should near this blizzard event receive around 40 inches / 1 meter of fresh snow, near temperatures -30 to -40°F (-17 to -22°C) below temperature average, according to several runs of the GFS model.

Snow sleets are forecasted to appear even in Kansas, Missouri, Arkansas, Kentucky, Tennessee, or Virginia.

The coldwave has already hit the western coast of the USA and cold Arctic air will be moving farther eastward during a workweek, with a result of severe winter conditions in the Great Lakes region around the weekend 13.-14. November 2021.

The heaviest snowfall is possible mainly in Minnesota, Wisconsin, Michigan, the USA, and Ontario, Canada, including densely populated areas along shores of lakes.

Washington D.C. and New York are however forecasted to stay away from the blizzard effect, so far, however, later with a significant cooldown, too.

Cold anomaly will be evident not only in Northern Plains and Ontario but too across Midwest and Southeast, the USA.

Winter-like weather should across all Northern Hemisphere returning until 15. December, near negative AO phases /https://mkweather.com/be-prepared-for-an-extremely-long-and-strong-coldwave-arctic-blasts-in-europe-between-10-november-15-december-are-expected//.

If you live in the Great Lakes region, we strongly in the following week recommend you to watch the current weather news, forecasts, warnings, and advisories.

Blizzard should cause problems on roads, highways and railways, power outages or significantly worsen a heat comfort, mainly near very low wind-chill temperatures, up to -10°F / -24°C and real temperatures up to -3°F / -20°C, rarely lower.

(Visited 227 times, 2 visits today)
Liked it? Take a second to support on Patreon!