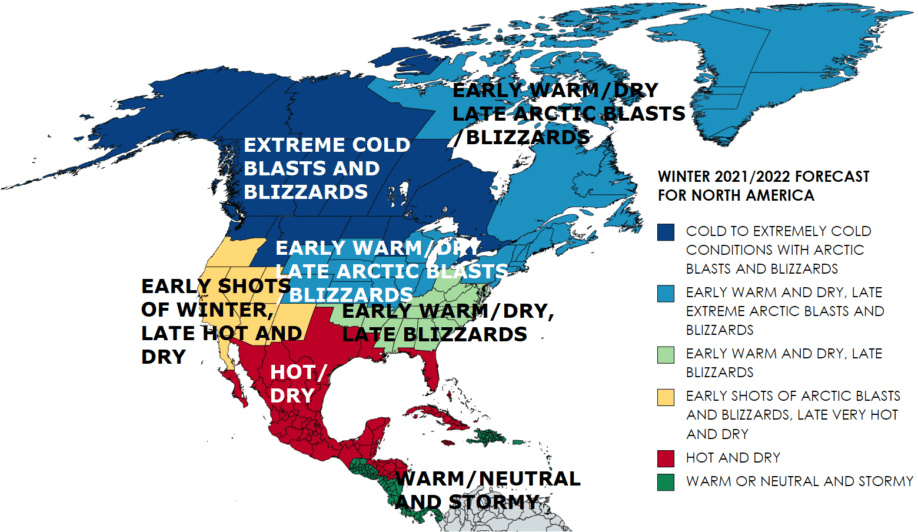 In the last article we looked at forecasted Winter 2021/2022 conditions in Europe /https://mkweather.com/winter-2021-2022-forecast-for-europe-early-extreme-arctic-and-siberian-blasts-and-blizzards-late-dry-and-very-warm-conditions//. Now, we should look at predicted patterns and conditions in regions of North America.

Such as we detailed analyzed in the last Winter 2021/2022 forecast for the Northern hemisphere / https://mkweather.com/winter-2021-2022-forecast-extreme-frosts-in-eurasia-in-december-in-north-america-in-february-early-canadian-stratospheric-warming-ne-pacific-blob-la-nina-qbo-and-shift-from-nao-to-nao-such-le/ /, and Mkweather Winter 2021/2022 forecast for Europe /link above/, 8 main circulation patterns and important parameters will be affecting conditions during an upcoming winter:

Now, we should look at a forecasted map for Winter 2021/2022 for Europe and 6 main sectors, with similar regimes of weather:

A) ALASKA, WESTERN, AND CENTRAL CANADA, NORTHERN USA: During Winter 2021/2022 thanks to a combination of mentioned circulation patterns and parameters above, mainly La Nina, AO, and NAO configurations, Early Canadian Stratospheric Warming, and NE Pacific Warm Blob. Mainly La Nina is associated with cold conditions in these parts of the continent, but significantly will contribute mainly during the peak of winter NE Pacific Warm Blob, with anomalously high geopotential above the Pacific coast. Cold air will be flowing above the continent on the front side of this system and with a strengthening of the anomaly and transition from NAO-/AO- to NAO+/AO+, extreme winter conditions should spread from Alaska and Pacific Canada above Central Canada and the northern USA, gradually. It means potential for early frosts in Canada and Alaska up to -45°C / -50°F and late-season frosts up to -55°C / -65°F in the coldest parts. Severe frosts in the northern USA should during the peak in February bring temperatures below -40°C / -40°F.

B) EASTERN CANADA, NORTHEAST, CENTRAL USA (MUCH OF MIDWEST), AND GREENLAND: Thanks to a switch from NAO-/AO- to NAO+/AO+ phase during the winter, these parts will be very warm and dry firstly, but gradually, severe Arctic blasts from the north and northwest and Nor´easters (blizzards with SW-NE stormtracks across Eastern USA, are predicted to come, with a peak around February 2022. High temperatures above +20°C / 68°F, rarely in the south +25°C / 77°F should surprise in early December, while in eastern Canada and even Nunavut and Greenland should Early Canadian Stratospheric Warming bring temperatures above 0°C/ 32°F in many cold parts. In late winter, -35°C / -30°F frosts should surprise the coldest parts of Northeast and Midwest and -55°C / -65°F frosts Eastern Canada and Greenland. Great Lakes should freeze significantly mainly at the end of winter and in March 2022, when coldwaves should be continuing, yet.

C) SOUTHEAST: Very warm conditions in early and in the south mid-Winter 2021/2022 should replace late-season Arctic blasts and blizzards, however, with limited power and duration. A reason will be associated mainly with the NE Pacific Warm blob in combination with La Nina and NAO+. Key should be a development above the continent until late winter – NAO+ means mainly close stocks of the cold air above Great Lakes region, which during neutral or shorter NAO- phases should shift just above this region relatively quickly and without bigger problems and collide here with tropical air masses thanks to so-called Nor´easters-like pressure lows. While early winter should bring summer temperatures above +25°C / 77°F, while during late winter, frosts from -10°C / 15°F to -20°C / -5°F should appear from the south to the north.

D) SOUTHWEST: Thanks to NAO-/AO-, early touches of frosts are possible in the Southwest, including frosts and blizzards. Relatively quickly however should this pattern shift into hot and dry, even with rare wildfires. Temperatures below 0°C / 32°C will be possible in warmer metropolitan cities in early winter, while late winter should bring summer or tropical days above +25 /77°F, rarely +30°C / 86°F. NE Pacific Warm blob in January and February will affect mainly northern parts of the region.

E) MEXICO, GULF COAST, FLORIDA, CUBA: Persisting hot and dry weather is forecasted for Mexico, Gulf Coast, Florida, and Cuba, far away from Polar and Arctic fronts, with a relatively higher possibility of early short cold blasts in early winter and extremely hot conditions in late winter, in Mexico around +35°C / 95°F. Wildfires in Mexico should appear prematurely and NAO+/AO+ should strengthen drought and hot weather before an arrival of Spring 2022.

F) SOUTH-CENTRAL AMERICA, PARTS OF THE CARIBBEAN: Mostly neutral or warm temperatures, with stormy potential and summer and tropical temperatures (+25/+35°C / 77°C/95°F) are forecasted for south-Central America and parts of the Caribbean, with rare tropical depression or tropical storms and very rare cold blasts during a possible peak of destabilization of the polar vortex in the first half of winter.

(Visited 399 times, 12 visits today)
Liked it? Take a second to support on Patreon!