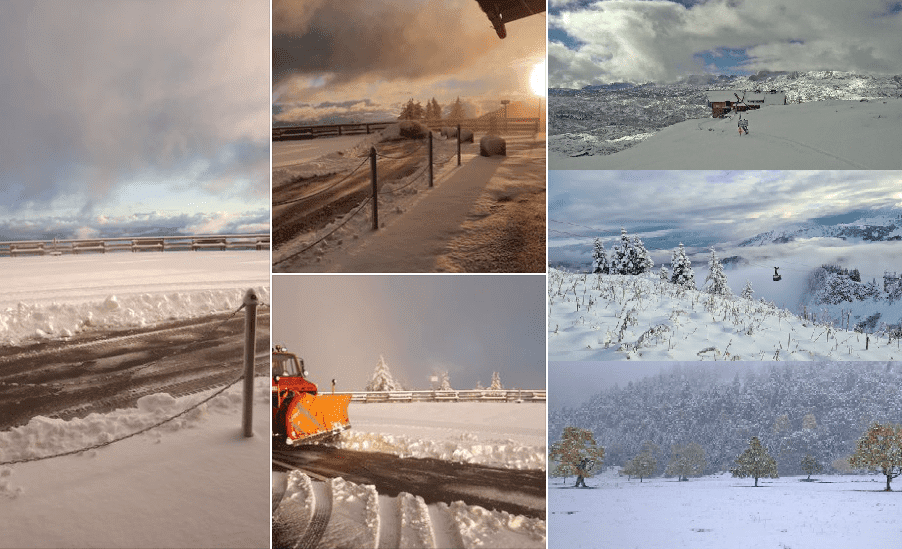 The heaviest snowfall was on Wednesday, 13. October 2021 reported from border regions with Austria (around the cities of Sudelfeld, Obersalzberg, Bayrischzell), at levels already around 800 MASL. In Austria, snowing in similar elevations appeared at the night from Tuesday to Wednesday, 12.-13. October 2021, too /https://www.wetter.at/wetter/oesterreich-wetter/wintereinbruch-hier-liegt-jetzt-schon-schnee/495194388; https://www.wetter.at/wetter/oesterreich-wetter/kaltfront-bringt-schnee-bis-auf-800m/494972155/

Temperatures dropped below zero, or, stayed tightly above 0°C during the night in the region and the cold front brought long-expected first snow.

5-20 cm up to 1000 MASL regionally appeared, with very rare stormMAX up to 40 cm according to media.

Temperatures drop to +0,3°C in Hamburg on the north, too and the next nights should be in valleys and basins freezing, in the mountains with a snow cover, -9°C was by regional media expected.

The first snow below 1000 MASL regionally appeared in southern Poland, northern Slovakia, or Czechia, too.

After the first taste of winter, Indian summer will come to the region prematurely, such was earlier forecasted – already from 20. October 2021, with lasting maybe until 15. November 2021 /https://mkweather.com/indian-summer-soon-back-spain-portugal-34c-italy-france-turkey-30c-balkan-27c-germany-hungary-ukraine-25c-benelux-central-europe-23c-british-island/; https://mkweather.com/november-should-start-with-summer-weather-record-temperatures-25c-in-continental-europe-are-possible//.

However, in Scandinavia, extreme frosts are forecasted /https://mkweather.com/extreme-frosts-in-norway-sweden-and-finland-are-confirming-30c-minimum-and-15c-maximum-temperatures-are-possible//, and after a long and late Indian summer, legendary cold December 2021/early January 2022 are possible /https://mkweather.com/winter-2021-2022-forecast-extreme-frosts-in-eurasia-in-december-in-north-america-in-february-early-canadian-stratospheric-warming-ne-pacific-blob-la-nina-qbo-and-shift-from-nao-to-nao-such-le/; https://mkweather.com/winter-2021-2022-forecast-a-peak-near-nao-already-in-december-ne-pacific-warm-blob-nao-and-early-spring-in-february-north-america-oppositely-warm-start-cold-end-of-winter/; https://mkweather.com/russian-meteorologists-expect-extreme-winter-around-december-january-2021-22//.