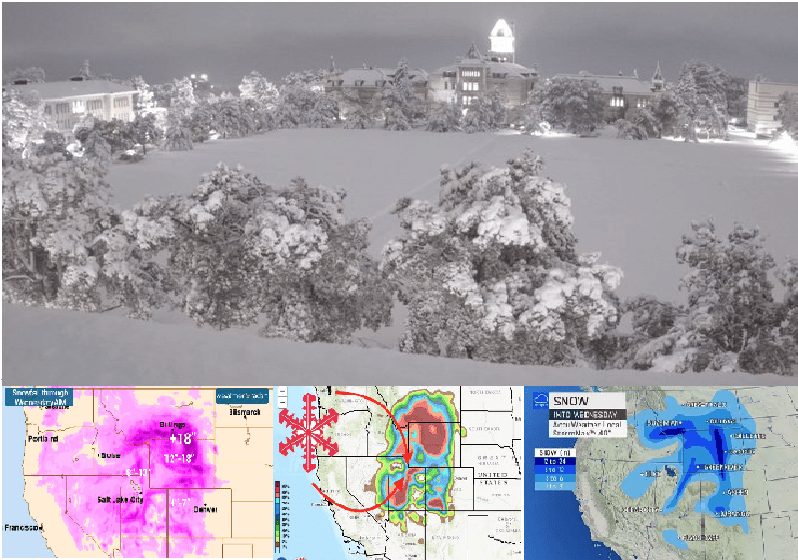 The western half of the USA hit in the last hours the first blizzard of Winter season 2021/2022.

Before a severe cooldown with snowing, we warned already in the articles /https://mkweather.com/mould-bay-canada-237c-extreme-arctic-blasts-hit-all-western-half-of-the-usa-soon/; https://mkweather.com/a-severe-coldwave-with-snow-in-west-hot-indian-summer-in-east-the-usa-canada-will-experience-with-winter-and-summer-at-the-same-time//.

Now, we should look at the situation in the most hit American states.

The most severe snowstorm was/is expected to hit parts of Montana, Wyoming, and Utah, but regionally it should be critical in Idaho, Oregon, or Colorado, too.

According to Accuweather StormMAX, up to 40 inches / 1 meter of snow from snowfall event is expected.

In Utah, almost 90 runners are rescued during a 50-mile Utah ultramarathon after the course was battered by 18 inches of snow wrote dailymail.co.uk.

From snowy weather had a joy mainly children and pets, while a thick snow cover on the roads and highways is causing big problems.

A blizzard is associated with a severe cooldown, mostly 10-20°F, regionally 30°F below a seasonal average.

While western parts of the USA and Canada experience winter conditions, the eastern half reports an Indian summer /https://mkweather.com/extreme-indian-summer-in-the-usa-midwest-378c-100f-and-11-states-with-all-time-seasonal-records/; https://mkweather.com/it-has-never-been-so-hot-so-late-indian-head-saskatchewan-320c-a-new-october-temperature-record-estevan-saskatchewan-323c-brandon-manitoba-317c//.

Fresh news about anomalous temperatures up to +41,1°C in Texas before the arrival of Ex-hurricane Pamela /https://mkweather.com/hurricane-pamela-hits-mexico-texas-and-midwest// will be a topic of the next Mkweather article.

Indian summer will gradually shift from eastern USA above eastern and northern Canada, where thanks to Early Canadian Stratospheric Warming will be persisting until late November 2021 /https://mkweather.com/november-should-start-with-summer-weather-record-temperatures-25c-in-continental-europe-are-possible/; https://mkweather.com/20c-in-northern-25c-in-southern-mid-latitudes-in-november-2021-untraditionally-late-indian-summer-for-northern-hemisphere-is-confirming/; https://mkweather.com/silence-before-a-storm-and-the-last-summer-like-weather-before-an-extremely-cold-winter-the-first-half-of-november-should-bring-indian-summer-in-europe-canada-and-siberia-forecast-until-15-novemb//.

Winter forecast for North America promises a gradual strengthening of winter conditions in the USA and Canada, with a peak around February 2022 /Winter 2021/2022 forecast here: https://mkweather.com/winter-2021-2022-forecast-extreme-frosts-in-eurasia-in-december-in-north-america-in-february-early-canadian-stratospheric-warming-ne-pacific-blob-la-nina-qbo-and-shift-from-nao-to-nao-such-le/; https://mkweather.com/winter-2021-2022-forecast-a-peak-near-nao-already-in-december-ne-pacific-warm-blob-nao-and-early-spring-in-february-north-america-oppositely-warm-start-cold-end-of-winter/; https://mkweather.com/russian-meteorologists-expect-extreme-winter-around-december-january-2021-22//.