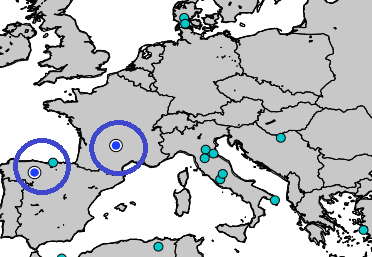 Coldwave hit in the last days not only central, northern or southeastern parts of Europe, but extremely cold was in Spain or France, including regions below 1000 MASL!

In France, frosts up to -4,9°C in populated Alpine valleys were measured in Ristolas (around 1500 MASL).

Frosts however appeared in lower situated regions, too – Aurillac, 640 MASL reported on Monday and Wednesday, 11. and 13. October 2021, both, -1,3°C – on Wednesday is should be a new daily record for the station.

The next series of severe frosts, 0/-5°C, very rarely in the Alpine and Carpathian valleys below 1000 MASL with a snow cover up to -10°C are on Thursday and Friday, 14.-15. October expected – frosts hit Benelux and eastern France, regionally too /https://mkweather.com/sudelfeld-obersalzberg-bayrischzell-regions-around-800-masl-in-southern-germany-received-the-first-snowfall-of-the-season/; https://mkweather.com/the-first-snow-in-poland-slovakia-and-czechia-in-basins-and-valleys-500-100-masl//

For Scandinavia, -30°C frosts were projected in the last days /https://mkweather.com/extreme-frosts-in-norway-sweden-and-finland-are-confirming-30c-minimum-and-15c-maximum-temperatures-are-possible//.

Extremely warm Indian summer is forecasted to return however already in the next week /https://mkweather.com/indian-summer-soon-back-spain-portugal-34c-italy-france-turkey-30c-balkan-27c-germany-hungary-ukraine-25c-benelux-central-europe-23c-british-island//; with a possibility of persisting until cca 15. November 2021 /https://mkweather.com/november-should-start-with-summer-weather-record-temperatures-25c-in-continental-europe-are-possible//.