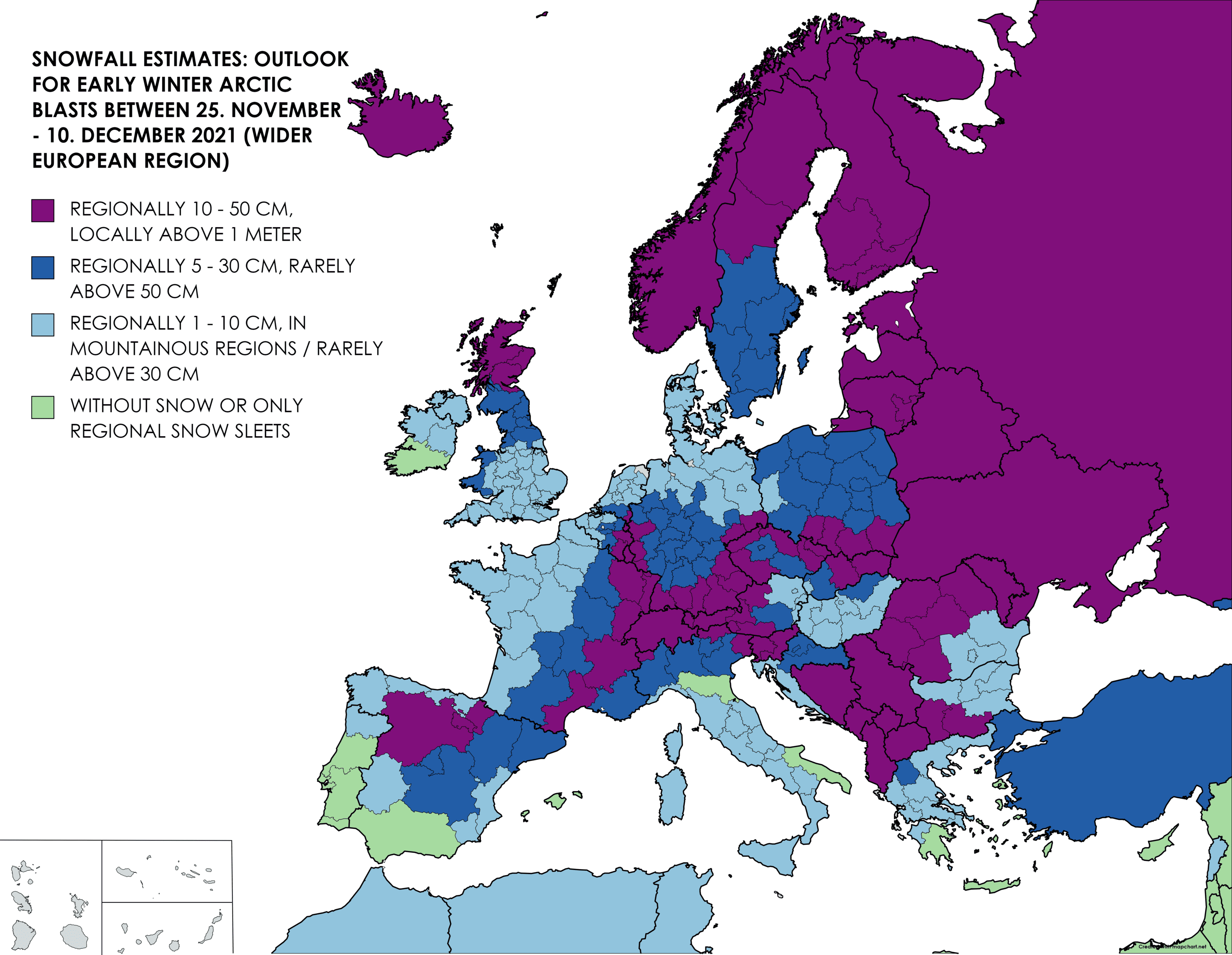 Estimates of regional snowfall in Europe during an upcoming Arctic period 25.11-10.12. 2021: Many regions with severe blizzards!

In this article, we are estimating the regional possibility of the depth of snow cover in densely populated frost valleys and basins below 1000 MASL (and lowlands) in the European wider region during the upcoming coldwaves between 25. November – 10. December 2021 (however, anomalously cold conditions should persist until New Year 2022(!)).

Already on Tuesday, 23. November, the temperature in Kevo, northern Finland, dropped to -29,0°C, which should be considered for the start of extreme coldwaves /https://mkweather.com/finland-290c-although-gfs-saw-only-20c-according-to-this-logic-40c-in-scandinavia-is-in-the-next-period-possible//. Current estimates for Scandinavia for around 29. November are saying about possible minimum temperatures around -37/-38°C and these estimates should change, yet.

Excluding southern Sweden, masses of snow and blizzard conditions are forecasted across the Scandinavian Peninsula – mainly in Norway and Lapland, later central Sweden and Finland. Most of Scandinavia will receive 10 – 50, regionally more than 1 meter of snowfall, below 1000 MASL.

In continental Europe (from France to Ukraine, including Balkan), many countries should report -20/-25°C soon /https://mkweather.com/arctic-frosts-up-to-25c-hit-the-region-from-france-to-ukraine-continental-europe//, very rarely, up to -30°C isn´t fully excluded.

In mountainous, but densely populated basins and valleys below 1000 MASL from France to Ukraine, 10 – 50 cm, locally more than 1 meter of snow is during the period possible. In lowlands, 10 – 30 or only 1 – 10 cm of snowfall is forecasted, rarely more.

The most of snow is forecasted for Scotland and northern England, but snow will appear in other parts of the British Islands, including Ireland, too. Only southwestern Ireland should stay without snowfall.

In European Mediterranean, frosts up to -15°C below 1000 MASL are possible in Iberia or Italy, up to -15 or -20°C in southern Balkan and -25°C in northern Balkan /https://mkweather.com/the-mediterranean-hits-extreme-frosts-and-snowstorms-winter-2021-2022-will-come-very-early//. Densely populated basins in Turkey (Erzurum region) will go below -20°C, maybe up to -30°C, but its above 1500 MASL.

Snowing in the Mediterranean will occur mainly in basins and valleys around 500 – 1000 MASL, but too in some coastal areas. In mountainous regions in Balkan, 10 – 50 cm, locally above 1 meter is possible, in Spain, Italy, Greece, and Turkey, snow below 1000 MASL should reach regionally 10 – 30 cm, in lowlands and coasts locally or regionally 1 – 10 cm.

In Northern Africa and the northern Middle East, up to -10°C and snow should surprise the mountains.

Snowing in Atlas and later in December in the northern Middle East below 1000 MASL is possible.

Some countries of Europe, such as Ireland, Denmark, Portugal, Malta, or Cyprus should be thanks to oceanic or Mediterranean conditions warmer than continental states and snow should appear mainly such as snow sleets in lowlands or in the mountains.

Currently, not so much extreme winter (below -20°C) is forecasted for Baltic countries and Belarus, where should be a little warmer than in continental Europe, Balkan, and Ukraine, but it should change, yet.

However, the regions should receive polite snowfall, 10 – 50 cm.

Another Mkweather snowfall forecast for the European region you will find here: /https://mkweather.com/europe-under-the-snow-heavy-blizzards-on-the-way-in-these-regions-a-risk-of-snow-calamity/.

Don´t forget to stay safe and warm, because, in colder regions, extreme early winter should be health- or life-threatening.

(Visited 844 times, 5 visits today)
Liked it? Take a second to support on Patreon!