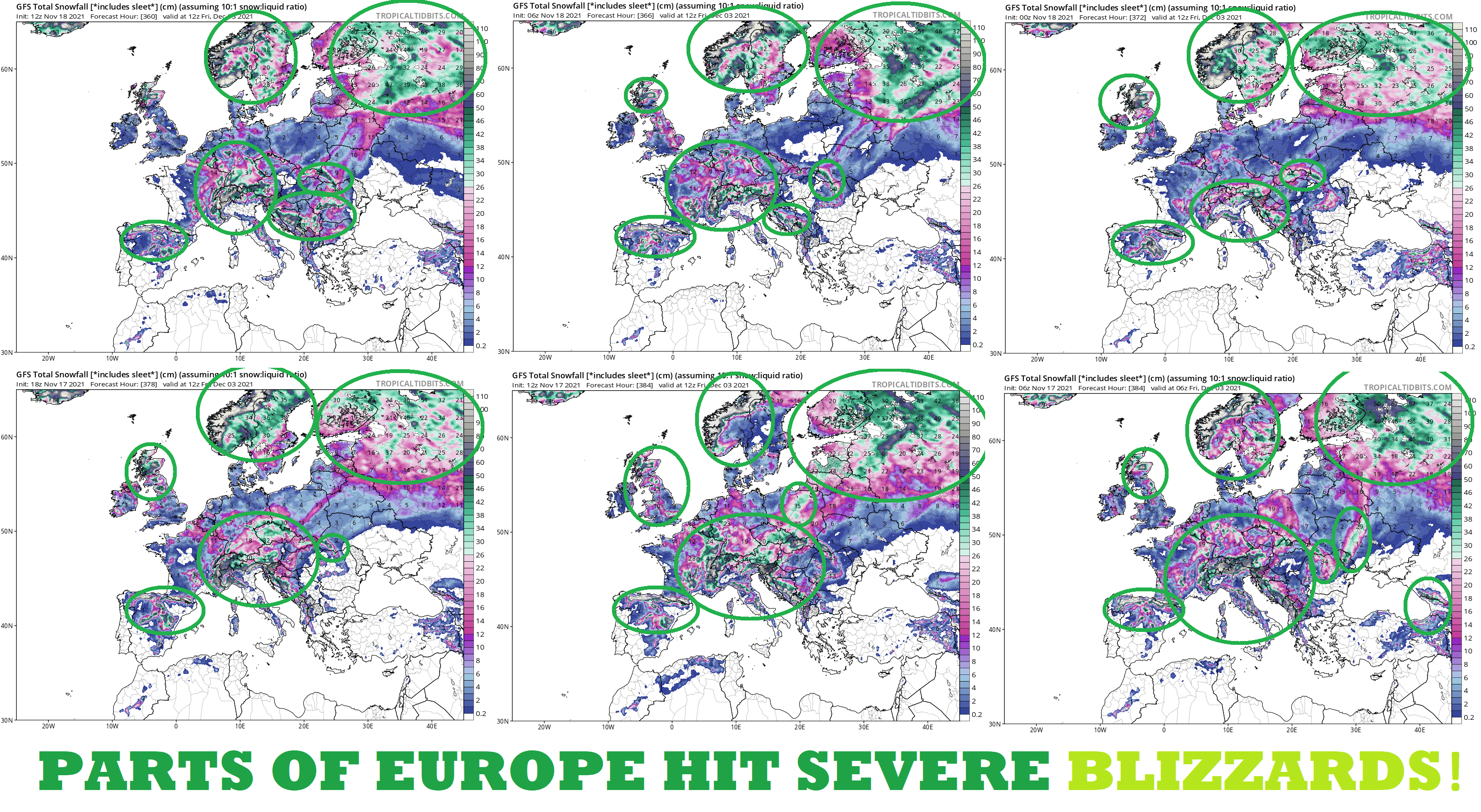 In the last series of articles, we brought the next extreme outputs of the GFS model, expecting anomalous coldwaves in late November and early December 2021 in Europe (and its wider region).

In France and Central Europe, -25°C and severe blizzards are according to these outputs possible /https://mkweather.com/central-europe-winter-should-start-with-historic-30c-in-frost-valleys-blizzards-and-snow-calamity-very-possible/; https://mkweather.com/temperature-records-25c-and-up-to-1-meter-of-snow-in-france//.

Even, -20°C is possible in Spain and -10°C in Northern Africa, in lower situated areas /https://mkweather.com/all-of-spain-under-frosts-attack-up-to-20c-half-of-iberia-under-the-snow-in-northern-africa-10c-is-possible//.

Blizzard lows will gradually hit many parts of Europe.

The worst situation is forecasted excluding Scandinavia and the northern half of European Russia in the wider Alpine region, from Benelux, eastern France, to Italy, Western Balkan, Czechia, or parts of Germany.

The next cluster of heavy snowfall is situated in the Carpathians – mainly in Slovakia, Romania, Ukraine, and the border region of southern Poland.

Severe snowfall is possible, too in northern, eastern, or central Spain and the Pyrenees.

The fourth cluster is located in Scotland and northern England.

Some runs expect heavy snowfall in lines in Polish and Ukrainian lowlands, too.

Heavy snowfall will appear in NE Turkey and Caucasus, too.

The most aggressive was a run from 17. November 12Z, which expect regionally snowfall 50 – 100 cm in lower situated parts below 1000 MASL in continental Europe from eastern France to western Ukraine.

Many parts of European mid-latitudes should receive 10 – 50 cm of snow, according to all last 6 runs of GFS.

Blizzard conditions should be accompanied by very low real-feel temperatures, in mountainous populated basins and valleys regionally below -20°C, thanks to possible severe winds.

A coldwave is starting already on Tuesday, 23. November 2021, therefore we recommend you to watch carefully current weather news, forecasts, warnings and advisories.

According to our long-term forecasts, anomalously cold weather in Europe should persist until New Year 2022 /https://mkweather.com/winter-should-be-strengthening-until-new-year-2022-wider-european-region-estimates//.

(Visited 895 times, 1 visits today)
Liked it? Take a second to support on Patreon!