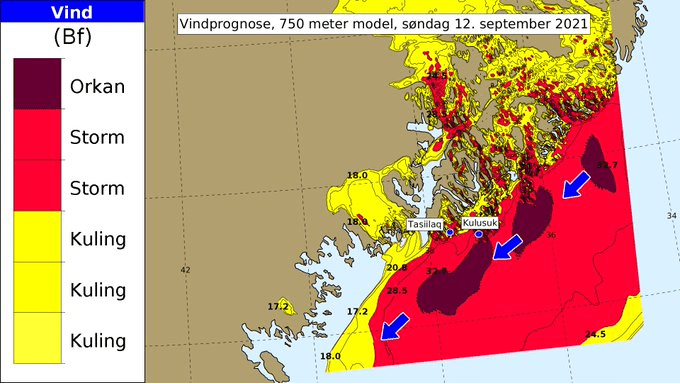 Only before a few days, we were informed about a “Snowicane” Larry, which as a remnant of major Hurricane Larry will shift from the Atlantic and Newfoundland (where brought 181 km/h wind gusts) directly above southeastern Greenland /https://mkweather.com/snowicane-in-greenland-ex-hurricane-larry-brings-15-meters-5-feet-of-snow-in-southeastern-greenland//.

A snowicane really brought into parts of the Tasiilaq region extreme snowfall around 1 – 1,5 meters and moreover, it brought hurricane-forced winds.

Severe winds with warming up came into Summit, central Greenland, where temperature increased to -3°C. In Summit, only before a few weeks, the first rain in history was observer /https://mkweather.com/the-first-rain-in-summit-the-highest-peak-of-greenland-ever//

Now, after a transition of ex-hurricane farther above the Arctic, western Greenland sank into a persisting coldwave, while eastern Greenland has stayed warmer.

Currently, Tropical depressions 95L and 96L Invest developed above North Atlantic, with a possibility of strengthening into the next tropical storms and hurricanes of Atlantic Hurricane season 2021 /will be updated already in the next Mkweather articles/.

In the USA, however, dry MJO will bring a drier and calmer peak of the season in the next weeks /https://mkweather.com/weaker-hurricane-season-between-10-september-20-october-dry-mjo-phases-456-and-7//, with heatwaves mainly in central and eastern USA and Canada /https://mkweather.com/ecmwf-6-week-forecast-until-25-october-europe-north-america-and-world//.

Extremely cold Winter 2021/2022 in the North American sector, from Alaska to western Greenland and northern USA, is forecasted /https://mkweather.com/a-big-special-composites-of-summer-winter-2021-in-continents-of-northern-southern-hemispheres-temperature-precipitation-air-pressure-zonal-winds-and-meridional-winds-anomalies/; https://mkweather.com/winter-2021-2022-forecast-the-first-reliable-estimates-extreme-cold-blasts-from-canada-and-western-siberia-snow-in-western-europe-and-eastern-asia-la-nina-qbo-to-qbo-shift-sufficient-nao-ao//.