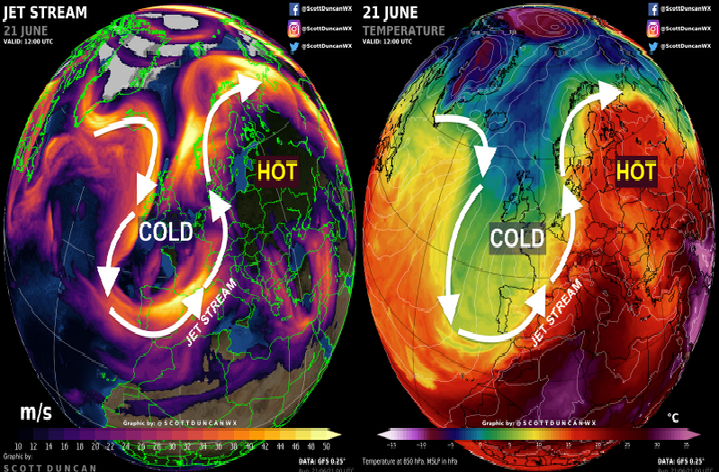 Before extremely cold weather in British Islands, on the back side of storm system above Europe, we have warned in previous article /Extreme cooldown after cold front: The UK +0,4°C, Ireland +2,8°C, Iceland -5,0°C – the lowest temperature in this season in populated areas in history! – mkweather/.

Anomalously cold air is coming from northwest – in Iceland before 8 days, -5,0°C was measured, what is the lowest temperature in populated parts of the country in history /link above + Iceland tourists rescued from snowstorm and extremely cold weather – mkweather/.

On Tuesday, 22. June 2021, minimum temperatures in Scotland and England dropped anomalously low, when -3,3°C in Carribridge, Scotland, and -1,4°C in Ravenseat, North Yorkshire, England, was measured.

Temperature from Scotland is only 2,3°C higher than all-time national record of minimum temperature for the UK for month June from 9. June 1955 /UK climate extremes – Met Office/.

Meteorologists have already informed, that parts of Scotland and northern England suffered the coldest night in last 30 years!

Summer weather with maximum temperature above +25°C isn´t for the warmest parts of the UK forecasted minimally until 3. July 2021 and cold weather pattern will be persisting around 10 days, yet.

It is a question, if some tropical days will appear in islands until 10. July 2021, because current forecasts later see possibility of +25 or +28°C, tropical value however in 2021 hasn´t been reached.

(Visited 265 times, 1 visits today)
Liked it? Take a second to support on Patreon!