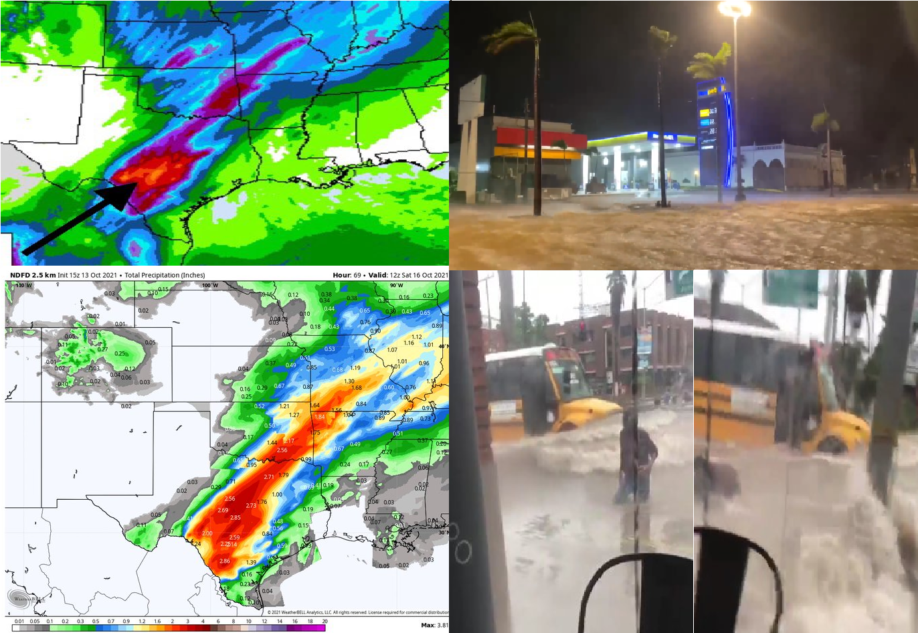 Western Mexico was hit by a hurricane with a strength of Category 1, but projections above Pacific waters told about a possibility of Category 3 strength before an arrival above Mexico.

The worst floods were, for now, reported from the region near Mazatlan, Mexico, but around 4 inches / 100 mm of rainfall from severe storms are still predicted from remnants of the system in parts of Texas, with flooding potential in densely populated areas.

Ex-Hurricane Pamela, such as a tropical depression with an untypical parabolic stormtrack from the Pacific above the Great Lakes region should make problems in Midwest, the USA, too, with regional downpours and flooding, too.

In some parts of the Midwest, however, mega-drought lasting since Summer 2021 should be interrupted.

In Monclova, Mexico, was even hotter, +41,8°C, which is a new October record for the north-Mexican city.

In the next weeks, Indian summer will shift from East Coast and Northeast USA above Eastern and Northern Canada, thanks to an anomaly called such as Early Canadian Stratospheric Warming /https://mkweather.com/november-should-start-with-summer-weather-record-temperatures-25c-in-continental-europe-are-possible/; https://mkweather.com/20c-in-northern-25c-in-southern-mid-latitudes-in-november-2021-untraditionally-late-indian-summer-for-northern-hemisphere-is-confirming/; https://mkweather.com/silence-before-a-storm-and-the-last-summer-like-weather-before-an-extremely-cold-winter-the-first-half-of-november-should-bring-indian-summer-in-europe-canada-and-siberia-forecast-until-15-novemb//.

This anomaly should be a signal for legendary cold frosts in December or early January 2021 in Europe, Asia, and North Africa, while North America expects a peak of Winter 2021/2022 around February 2022 /https://mkweather.com/winter-2021-2022-forecast-extreme-frosts-in-eurasia-in-december-in-north-america-in-february-early-canadian-stratospheric-warming-ne-pacific-blob-la-nina-qbo-and-shift-from-nao-to-nao-such-le/; https://mkweather.com/winter-2021-2022-forecast-a-peak-near-nao-already-in-december-ne-pacific-warm-blob-nao-and-early-spring-in-february-north-america-oppositely-warm-start-cold-end-of-winter/; https://mkweather.com/russian-meteorologists-expect-extreme-winter-around-december-january-2021-22//.