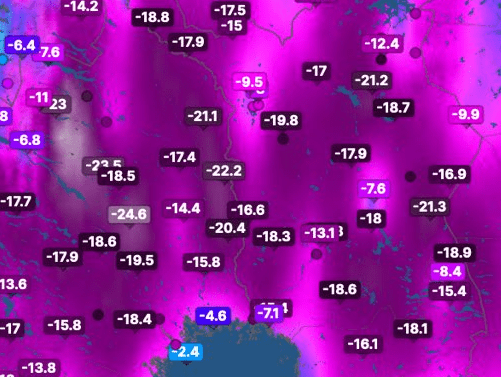 9 meteorological stations in Sweden and Finland reported in the morning minimum temperatures only -20-/-25°C, with the coldest report from Nattavaara, where -24,6°C was measured.

This temperature is the lowest minimum temperature in Scandinavia in October since the year 2006 (in the last 15 years).

Moreover, northern parts of Scandinavia report anomalous up to 50 cm of snow – so high snow cover hasn´t been measured here in October decades, too.

Extreme early cold blast in Scandinavia is linked with a persisting October 2021 NAO- phase, but too with anomalously cold Arctic (only 3 years in the last 15 years had higher Arctic Sea Ice Extent: https://mkweather.com/arctic-sea-ice-extent-26-greater-than-last-year-12th-lowest-on-record-and-the-largest-since-2014/) and the last extreme coldwave in Greenland /https://mkweather.com/extreme-frosts-in-greenland-the-temperature-dropped-to-508c-october-record-for-summit-station-3216-masl-is-only-514c//.

Until 10. November, so extreme minimum temperatures aren´t forecasted for Scandinavia, so far and Indian summer in many parts of Europe is predicted – above central parts with possibly abnormal temperatures up to +25°C /https://mkweather.com/november-brings-an-abnormal-heatwave-france-30c-germany-25c-the-uk-23c//.

(Visited 432 times, 1 visits today)
Liked it? Take a second to support on Patreon!