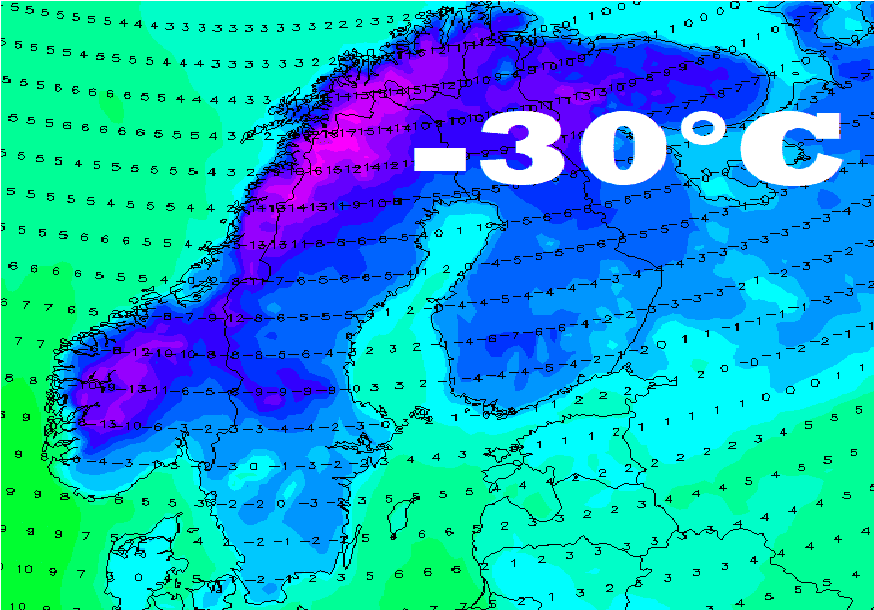 In some parts of Europe, e.g. Iceland or Scandinavia, extreme frosts will come earlier, already in 5 days, early next week (before 10. November 2021).

Only on 24. October, Sweden reported the coldest October temperature in Scandinavia since 2006, -24,6°C /https://mkweather.com/scandinavia-with-the-coldest-october-temperatures-since-2006-nattavaara-sweden-246c// and it´s very possible, that already around Tuesday, 9. November 2021, will be even colder, with a possibility of temperatures between -25/-30°C!

Regional seasonal or daily all-time temperature records will be again in Norway, Sweden, Finland, and Iceland possible and gradually, severe coldwaves and regional snowfall hit parts of continental Europe or even colder parts of British Islands or southern Europe.

in Central Europe, France, or Balkan, rarely up to -15°C, in northern Spain, Scotland or Benelux -10°C isn´t fully excluded.

In Scandinavia, before extremely cold weather, the next severe blizzard should appear, with the next anomalous regional snowfall, mainly in the northern half of the peninsula.

It appears, that it will be only the first peak of coldwaves, expected minimally until 15. December 2021 – in the second November decade and the first December decade, even stronger frosts and snowfall are possible.

If you live in Scandinavia, we strongly recommend you watch current weather news, forecasts, warnings, and advisories until early January – an early peak of Winter 2021/2022 is in the next 2 months possible.

(Visited 388 times, 1 visits today)
Liked it? Take a second to support on Patreon!