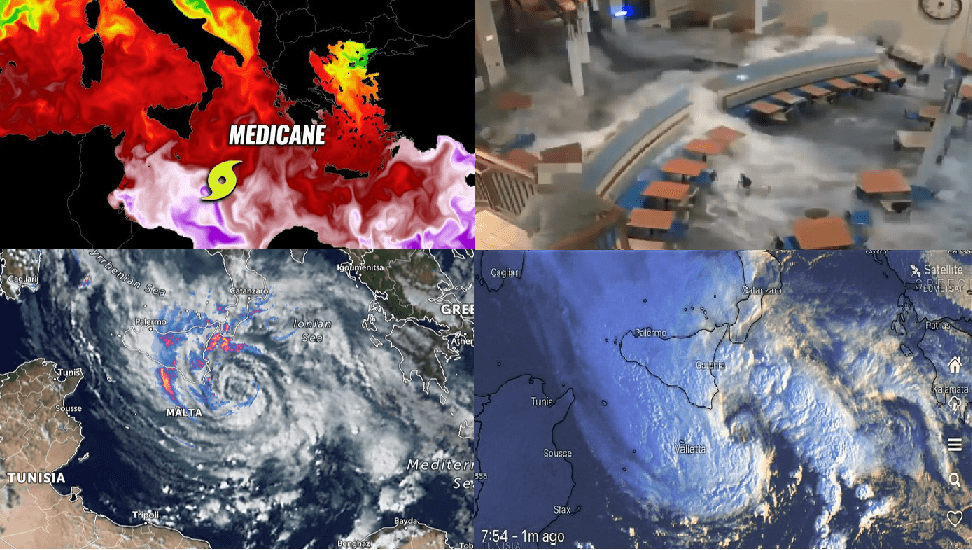 In the last week, we were informed about a powerful medicane, which in the last days hit Spain, Algeria, Tunisia, and Italy and brought extreme floods, with minimally 7 dead /https://mkweather.com/7-dead-after-a-devastating-medicane-in-algeria-tunisia-and-italy-320-mm-of-rain-in-linguaglossa-sicily-246-mm-in-ain-benian-algeria-and-136-mm-in-kalaat-andalous-ariana-tunisia/; https://mkweather.com/floods-in-algeria-and-spain-the-mediterranean-low-is-shifting-above-tunisia-italy-and-libya// and daily rainfall up to 320 mm (Italy), 246 mm (Algeria) and 136 mm (Tunisia) and floods in Alicante and Valencia regions, Spain appeared ,too.

In the last days, Medicane Gloria (Apollo) re-strengthened, and in Libya and Italy has brought the next severe floods.

In Syracusa, Sicily – the city received half of its average annual rainfall in 3 days.

Rainfall amounts this week reached 289 mm / 72 hours and the city, such as parts of Sicily, southern Italy and eastern Libya found themselves completely underwater.

Floodwater flooded a regional university in Catania, too – a stream of water invaded into an empty auditorium very aggressively, such we should see on the video in Tweet below.

In Corsica, Rhodos, and southern France, 4 tornado reports were even recorded on ESWD /https://eswd.eu//.

Floods thanks to the arrival of the polar vortex have already appeared in England, Scotland, and Wales //the next Mkweather article/.

(Visited 438 times, 1 visits today)
Liked it? Take a second to support on Patreon!