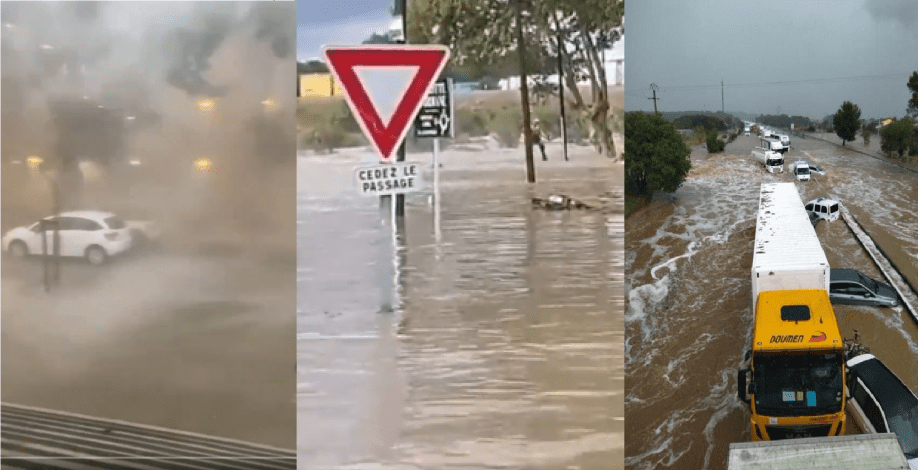 The extreme September heatwave in the western half of Europe was already replaced by severe storms, which brought the worst floods in France and Portugal.

The first series of severe floods and tornadoes hit the western half of Europe already before a few days /https://mkweather.com/a-deadly-and-devastating-f2-tornado-in-italy-tornado-in-germany-and-2-meters-high-floodwater-in-france-replaced-a-powerful-september-heatwave// and now, there are the next extreme events – mainly heavy rainfall in many countries, in France and Portugal with devastating floods.

In Gard, southern France, on Tuesday, 14. September 2021 during morning hours, 244 mm fell near severe storms only in 3 hours. Large hail and severe floods from the region were reported, too.

The city and neighborhood were immediately swept by 1 – 2 meter high floodwater and several people is missing.

Large damages are reported from crops – a harvest in vineyards was destroyed. Only in Spring 2021 vineyards in the region suffered from extreme frosts and in Summer 2021 by cold and wet weather /https://mkweather.com/bad-year-for-vineyards-in-france-belgium-after-extreme-frosts-in-spring-2021-extremely-wet-summer-2021-harvest-the-worst-since-1977-july-the-wettest-since-1981//. Later, near French Riviera, wildfires appeared /https://mkweather.com/french-riviera-in-the-fire-evacuations-near-saint-tropez-2-dead-27-injured//.

In Portugal, 120 municipalities were in the middle of the week flooded, with severe floods in the districts of Évora, Beja and Portalegre.

Across Iberia (Portugal and Spain) many reports of rainfall above 100 mm were reported during the week. The next wave of floods came only shortly after a previous event /https://mkweather.com/breaking-catastrophic-floods-hit-spain-toledo-valencia-barcelona-majorca-regions-are-completely-flooded-tourists-in-a-danger//.

Outlook for all shores of western Europe is however very hot until 25. October 2021, however, some flash floods from storms should furthermore appear /https://mkweather.com/forecast-for-europe-for-the-period-15-september-25-october-2021-western-europe-lot-of-indian-summer-east-severe-frosts/; https://mkweather.com/ecmwf-6-week-forecast-until-25-october-europe-north-america-and-world//.

In the second half of Winter 2021/2022, warm NAO+ pattern is in the region thanks to NE Pacific Warm blob anomaly possible /https://mkweather.com/mkweather-special-forecast-for-the-next-3-seasons-cold-autumn-2021-warmer-winter-2021-2022-cold-spring-2021-for-europe-a-peak-of-winter-in-its-colder-first-half-north-america-with-extreme-cold-2021-20/; https://mkweather.com/winter-2021-2022-forecast-the-first-reliable-estimates-extreme-cold-blasts-from-canada-and-western-siberia-snow-in-western-europe-and-eastern-asia-la-nina-qbo-to-qbo-shift-sufficient-nao-ao//.