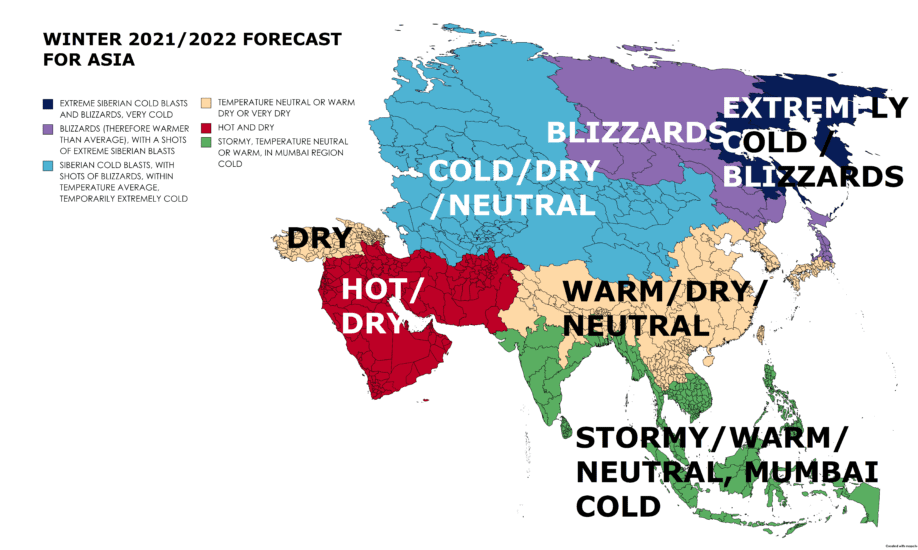 In the last articles we looked at forecasted Winter 2021/2022 conditions in Europe /https://mkweather.com/winter-2021-2022-forecast-for-europe-early-extreme-arctic-and-siberian-blasts-and-blizzards-late-dry-and-very-warm-conditions// and North America /https://mkweather.com/winter-2021-2022-forecast-for-north-america-a-peak-of-winter-with-extreme-arctic-blasts-and-blizzards-in-february-2022//. Now, we should look at Asia.

Such as we detailed analyzed in the last Winter 2021/2022 forecast for the Northern hemisphere / https://mkweather.com/winter-2021-2022-forecast-extreme-frosts-in-eurasia-in-december-in-north-america-in-february-early-canadian-stratospheric-warming-ne-pacific-blob-la-nina-qbo-and-shift-from-nao-to-nao-such-le/ /, and Mkweather Winter 2021/2022 forecast for Europe /link above/, 9 main circulation patterns and important parameters will be affecting conditions during an upcoming winter:

Now, we should look at a forecasted map for Winter 2021/2022 for Europe and 6 main sectors, with similar regimes of weather:

A) FAR EAST: A region appears such the coldest, with many Siberian cold blasts and blizzards during the upcoming winter, with the strongest negative temperature anomaly, mainly along the coast. The region will traditionally draw cold air from Eastern Siberia and Yakutia region simultaneously with escaping moisture from the warming Arctic. Frosts should be stronger in the first half of winter and blizzards in the second half of winter, thanks to the shift from NAO- (AO-) to NAO+ (AO+). Minimum temperatures up to -60°C in continental parts will be still possible.

B) EASTERN SIBERIA: Warm winter, but with many extreme blizzards is forecasted for Eastern Siberia. Escaping moisture from the warming Arctic will cause, that in some regions should fall during the upcoming winter 2x or maybe 4x more snow than is average. Thanks to NAO-/AO-, however, in the first half of winter, according to Russian meteorologists /link above/ in early January 2022, should appear a peak of winter with extreme Siberian frosts, up to -65°C. All will be strongly associated with conditions of the polar vortex – southern and weak polar vortex means drier and extremely cold conditions, while northern and strong polar vortex means warm conditions and blizzards.

C) WESTERN WIBERIA, CENTRAL ASIA: A longer time it appears, that above Western Siberia should develop, mainly during the first half of winter, a polite stock of very cold air, with cold blasts not only in Europe but too in Central Asia, NW China or Mongolia. Relatively dry or neutral conditions above the region should mean fewer blizzard conditions and more chances for Siberian blasts. Thanks to NAO-/AO-, frosts should hit the region already in December, with a peak possibly around late December 2021 or early January 2021. NAO+/AO+ in the next period (late winter) should bring warmer conditions and more western airflow, in southern parts (Central Asia) even summer temperatures (above +25°C). During the peak of the winter, however, temperatures should drop up to -55°C in Siberian and very deep below zero in Central Asia.

D) EAST ASIA, HIMALAYAN REGION, TURKEY, AND CAUCASUS: Dry monsoon-like conditions are forecasted in East Asia, northern India, northern continental SE Asia, and dry conditions should hit Turkey and Caucasus. Relatively better winter conditions in this region should come in the first half of Winter 2021/2022, too, with cold blasts across East Asia and Western disturbances in India, with a possible peak of winter (severe frosts in China, Korea, and Japan, ground frosts, fogs and precipitation in northern India). Turkey should be cold and warm both, thanks to alternating cold air masses from Siberia and hot air masses from the Middle East, very dry weather however should mean cold nights and severe frosts. The second half of winter in East Asia and northern India and SE Asia should bring premature heatwaves and drought. In East Asia, Turkey, and the Caucasus, frosts below -30°C should surprise in late December / Early January, but at the end of winter, summer +25°C should be measured; in India and northern SE Asia, temperatures in early winter should drop up to 0°C, but late winter promises the first tropical +30°C. AO/NAO will have probably a stronger impact on East Asia such as La Nina, MJO. In India, a shift from negative to positive IOD means to shift in tropical activity from the Bay of Bengal to the Arabian Sea coast, but northern India will be hit by tropical systems only marginally.

E) THE MIDDLE EAST: Hot and dry conditions will be leading in the region, mainly thanks to NAO+/AO+ phases in January and February. However, NAO-/AO- should bring a peak of winter in December and early January, with frosts and snow in northern parts (basins and valleys). In the second half of winter, however, tropical days above +30°C will be usual. Western disturbances and the Mediterranean lows are therefore more probable in the first half of the winter. A shift from negative to positive IOD and associated MJO phases should cause firstly hot and dry conditions in the southern Arabian Peninsula and later tropical activity, mainly in Oman and Yemen.

F) SOUTHERN AND SOUTHEASTERN MONSOON ASIA: La Nina, wet MJO, negative IOD combination means flooding and the stormy start of winter in Southeastern Asia and Eastern India. Only a possible weakening La Nina, drier MJO, and positive IOD should bring calmer conditions in mentioned regions in late winter, but tropical activity should shift above the western coast of India – Mumbai region should be stormy and cold. Cloudiness from storm systems in many regions brings warm nights and therefore higher average temperatures, rainfall will be important for harvest. Rare cooldowns in northern parts of the region in the first half of winter should be associated with AO-/NAO-. Temperatures around +25/+30°C will be usual in the region during the winter.