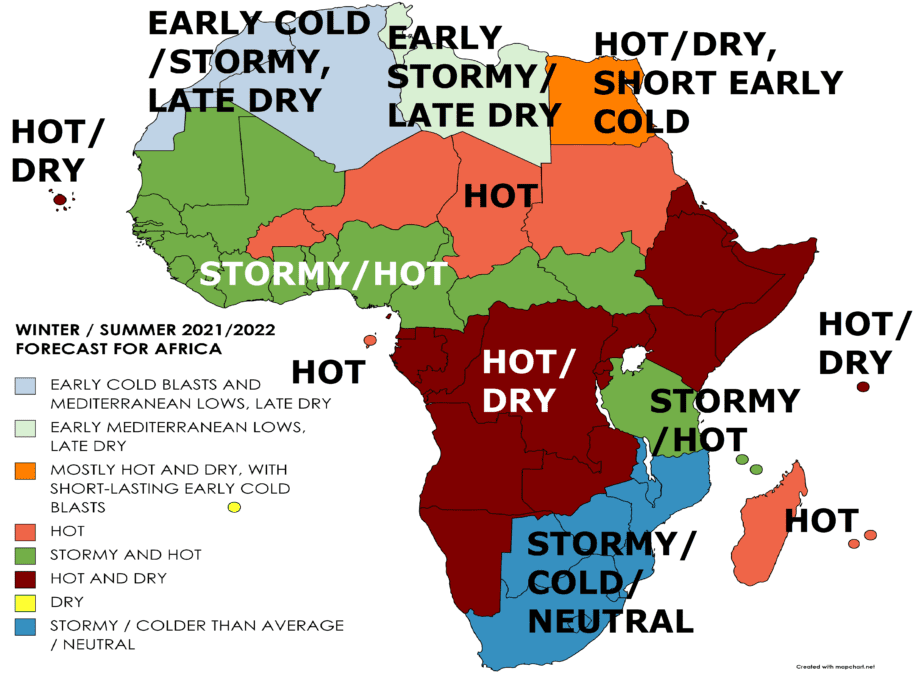 The last update of the Winter forecast for the Northern Hemisphere we published here / https://mkweather.com/winter-2021-2022-forecast-extreme-frosts-in-eurasia-in-december-in-north-america-in-february-early-canadian-stratospheric-warming-ne-pacific-blob-la-nina-qbo-and-shift-from-nao-to-nao-such-le/ /.

10 main circulation patterns and important parameters will be affecting Africa during an upcoming winter/summer:

Now, we should look at a forecasted map for Winter 2021/2022 for Africa and 6 main sectors, with similar regimes of weather:

A) ALGERIA, MOROCCO, WESTERN SAHARA: Early NAO-/AO- phases should surprise with early Arctic cold blasts and blizzards from Mediterranean lows in the mountains. The second half of winter however should be very dry, with hot days, but cold NAO+ mornings. Peaking of winter around the end of December and early January is forecasted for Eurasia, too, there will be stocks of anomalously cold air, with a potential to shift above North Africa. Important will be the timing of a possible SSW, which should shift the peak of winter weeks earlier or later than was expected. NE Pacific Warm Blob however strongly correlates with NAO+ and the second half of winter should be already farther from the polar and arctic front in the region. Temperatures up to -10°C and snow should appear in the first half of winter in frost valleys below 1000 MASL, while the second half of winter (the first half, too, but with lesser frequency) should surprise with +30°C temperatures not only above Sahara.

B) TUNISIA, LIBYA: More Mediterranean lows mainly in the first half of Winter 2021/2022 should mean an overall wet anomaly above the region. Frosts won´t be so strong such as in NW Africa, but temperatures during the peak of winter should drop below 0°C with rare snowing. The second half of winter should be dry, with hot days and cold nights (NAO+ regime). Libya should be warmer, mainly eastern parts. Mediterranean lows should bring local flash floods, hailstorms, or even rare tornadoes in early winter during NAO- phases.

C) EGYPT: Only weaker shots of winter in its first half, with rare frosts or snowing during the peaking and mostly hot and dry weather, in southern parts +30/+35°C, with holiday weather, is forecasted. A dry and warm anomaly is predicted for the winter and Egypt should become the warmest north-African country in the winter. Conditions in comparison with Summer 2021 therefore will be swapped and colder will be western and hotter eastern Sahara (and the Sahel).

D) EASTERN AND CENTRAL SAHEL, MADAGASCAR, MAURITIUS, REUNION: Hot conditions and season of drought are forecasted for Eastern and Central Sahel. Season of drought should come prematurely – Sahel indices are saying about premature drought in October and November in the region, without floods, but with a possible regional food crisis. Tropical temperatures above +35°C will be possible, and during a possible Major SSW in the first half of winter, mainly around late December and early January, cold shots from the north are possible, however, with minimum temperatures above 0°C and relatively colder days. Madagascar, Mauritius, and Reunion should be hotter thanks to the negative IOD phase in December (and early January), which should dominate above a positive phase in February (and late January). However, in all eastern and southeastern Africa, increased activity of cyclones is overall in the next half-year forecasted, therefore, the second half of winter should bring a dramatic change and strong tropical activity.

E) WEST AFRICA, WESTERN SAHEL, CENTRAL EQUATORIAL AFRICA, TANZANIA: Stormy and hot pattern for West Africa, Western Sahel, Central Equatorial Africa, and Tanzania should be linked mainly with La Nina, MJO, and IOD conditions. Season of rains should be stronger, with many floods and landslides, humidex should be high, with increased amounts of collapses from the heat. West African patterns promise stormy patterns, too. Tanzania should be hit by a stronger cyclone season mainly in the second half of summer.

F) EAST AFRICA, SOUTH-CENTRAL AFRICA, NAMIBIA, ANGOLA, CABO VERDE: Hot and dry regions of East Africa, Congos, Angola, or Namibia are telling above dry IOD and MJO conditions in early summer, such as lack of impact of La Nina in the upcoming season. This circulation pattern should be associated with a persisting drought, wildfires or even, regional famines, lack of water, and food. The second half of winter, with a positive IOD and wet MJO near the African coast, should be “better”, with some tropical cyclones in Somalia or Kenya.

H) SOUTH-AFRICAN REGION: La Nina and a shift from negative to positive IOD, such as a possible AAO+ should be leading patterns in the region during the upcoming summer, with a result of neutral or regionally colder, and mainly stormy Summer 2021/2022. Storms should bring gusting winds, heavy rainfall, hail, damaging lighting, or tornadoes, and mainly in the second half of the season, the strong activity of Indian cyclones is near positive IOD possible. Temperatures during heatwaves however should reaching almost +50°C in deserts and +40°C along the coast and in higher elevated, still populated areas.

Mkweather until 30. November will be updating Winter 2021/2022 forecasts for Northern Hemisphere, yet, approximately 3-5 times, therefore stay watch weather with us and be prepared for possible early attacks of the winter and Mediterranean lows in North Africa. Be careful and watch storm forecasts in South African countries, during the upcoming Summer 2021/2022, too and stay safe in other regions, near severe storms in Equatorial/Western Africa or severe drought in Eastern or South-Central Africa.

(Visited 469 times, 9 visits today)
Liked it? Take a second to support on Patreon!