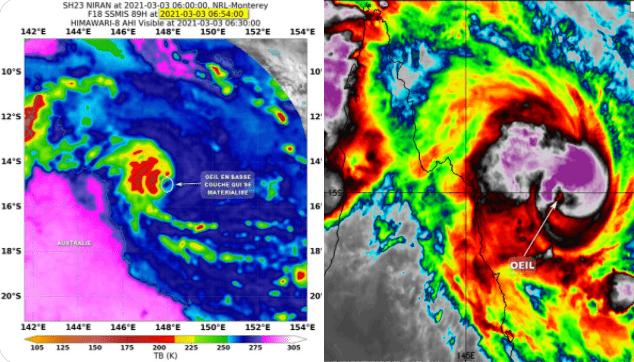 2 powerful cyclones are active in Ausralian region, but only one hit significant parts of the land – cyclone Niran has brought damages in Northern Territory and Queensland, Australia and continue on its, probably deadly way towards New Caledonia and New Zealand!

While in Australia, winds according to the newest news reached 160 km/h on Wednesday, 3. March 2021, in New Caledonia, devastating winds up to 250 km/h are expected already from Friday to Saturday, 5.-6. March 2021, with the next trajectory of remnants of the system towards northern coast, Northern Island, New Zealand.

Pressure in the middle of the system is expected to reach around 947 hPa on Friday, 5. March and system therefore should be stronger than Cyclone Marian, Category 4 /https://mkweather.com/cyclone-marian-category-4-was-shifting-only-350-km-from-cocos-island//.

New Caledonia will be hit in full power and it should be the worst cyclone of the season in the country, with possible fatalities and widespread damages.

It is a question, if around Sunday and Monday, 7.-8. March, cyclone brings heavy rains into northern parts of New Zealand, but effect of the system on the northern coast is for now probable.

Despite of Cyclone Niran and Marian, tropical depression 90S Invest shoud cause complications in Mauritius and Reunion these days, but overall, weakening of tropical ativity across Southern Hemisphere is expected until the start of April 2021.

Atlantic hurricane season 2021 shouldn´t be so extremely active such as previous, thanks to neutral ENSO, or even El nino in summer and autumn 2021, but the first disturbances should appear already in late spring 2021.