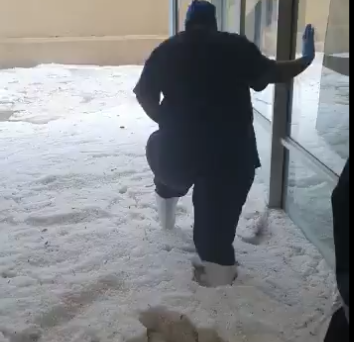 Not so long since Cyclone Guambe event in eastern South Africa /https://mkweather.com/tropical-storm-guambe-with-155-km-h-winds-hit-south-africa-eswatini-mozambique-and-madagascar//, the next severe stroms, with floods and hail hit parts of South Africa at the end of Winter 2020/2021 and at the beginning of Autumn 2021.

Floods hit mainly Kruger region, northeastern SAR, which was hit by cyclones Guambe and previously, Eloise, too. From the continent, next low pressure systems shifted above region with results of widespread flooding in one of the most famous national park in the world.

Extreme hailstorm hit Betoni, near Johannesburg and Pretoria, subsequently, but severe hails were reported from larger region of Gauteng, too. Streets of the city were flooded after surprisingly strong ice-storm.

South Africa, such as other countries in southern half of Africa, experiences with really stormy and mostly cold Summer 2020/2021 /https://mkweather.com/spring-autumn-2021-forecast-for-africa// and thanks to La nina, cold and humid trend will be preserved during Autumn 2021, with many cyclonic situations and the next possible cyclones from Indian Ocean.

While southern aprts of Africa will be cold and rainy, Sahara is expected to be very hot during the next months, with possible strong early heatwaves in Mediterranean.

Region from Senegal to South Sudan appears to be very stormy during the next months, what should bring after extreme season of rains in 2020 next severe floods in 2021.